The Testimony of Eight Witnesses

Be it known unto all nations, kindreds, tongues, and people, unto whom this work shall come: That Joseph Smith, Jun., the translator of this work, has shown unto us the plates of which hath been spoken, which have the appearance of gold; and as many of the leaves as the said Smith has translated we did handle with our hands; and we also saw the engravings thereon, all of which has the appearance of ancient work, and of curious workmanship. And this we bear record with words of soberness, that the said Smith has shown unto us, for we have seen and hefted, and know of a surety that the said Smith has got the plates of which we have spoken. And we give our names unto the world, to witness unto the world that which we have seen. And we lie not, God bearing witness of it. 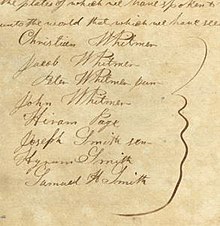 A few days later, the Whitmers joined the Smith family at their farm in Manchester. Knowing the Lord had promised to establish His words “in the mouth of as many witnesses as seemeth him good,” Joseph went into the woods with his father, Hyrum, and Samuel, as well as four of David Whitmer’s brothers﻿—Christian, Jacob, Peter Jr., and John﻿—and their brother-in-law Hiram Page.

The eight men gathered at a spot where the Smith family often went to pray privately. With the Lord’s permission, Joseph uncovered the plates and showed them to the group. They did not see an angel as the Three Witnesses had, but Joseph let them hold the record in their hands, turn its pages, and inspect its ancient writing. Handling the plates affirmed their faith that Joseph’s testimony about the angel and the ancient record was true.

Now that the translation was over and he had witnesses to support his miraculous testimony, Joseph no longer needed the plates. After the men left the woods and went back to the house, the angel appeared and Joseph returned the sacred record to his care.