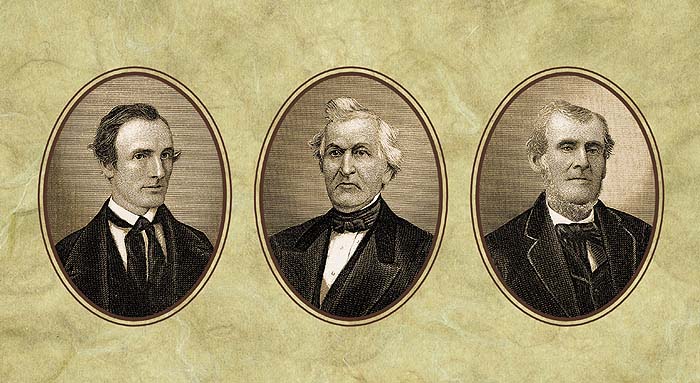 The Testimony of Three Witnesses

Be it known unto all nations, kindreds, tongues, and people, unto whom this work shall come: That we, through the grace of God the Father, and our Lord Jesus Christ, have seen the plates which contain this record, which is a record of the people of Nephi, and also of the Lamanites, their brethren, and also of the people of Jared, who came from the tower of which hath been spoken. And we also know that they have been translated by the gift and power of God, for his voice hath declared it unto us; wherefore we know of a surety that the work is true. And we also testify that we have seen the engravings which are upon the plates; and they have been shown unto us by the power of God, and not of man. And we declare with words of soberness, that an angel of God came down from heaven, and he brought and laid before our eyes, that we beheld and saw the plates, and the engravings thereon; and we know that it is by the grace of God the Father, and our Lord Jesus Christ, that we beheld and bear record that these things are true. And it is marvelous in our eyes. Nevertheless, the voice of the Lord commanded us that we should bear record of it; wherefore, to be obedient unto the commandments of God, we bear testimony of these things. And we know that if we are faithful in Christ, we shall rid our garments of the blood of all men, and be found spotless before the judgment-seat of Christ, and shall dwell with him eternally in the heavens. And the honor be to the Father, and to the Son, and to the Holy Ghost, which is one God. Amen.

―  Oliver Cowdery
―  David Whitmer
―  Martin Harris
As Joseph and his friends finished the translation, their minds turned to a promise the Lord had given in the Book of Mormon and in His revelations﻿—to show the plates to three witnesses. Joseph’s parents and Martin Harris were visiting the Whitmer farm at the time, and one morning Martin, Oliver, and David pleaded with Joseph to let them be the witnesses. Joseph prayed and the Lord answered, saying that if they relied on Him wholeheartedly and committed to testify of the truth, they could see the plates.

“You have got to humble yourself before your God this day,” Joseph told Martin specifically, “and obtain if possible a forgiveness of your sins.”

Later that day, Joseph led the three men into the woods near the Whitmer home. They knelt, and each took a turn praying to be shown the plates, but nothing happened. They tried a second time, but still nothing happened. Finally, Martin rose and walked away, saying he was the reason the heavens remained closed.

Joseph, Oliver, and David returned to prayer, and soon an angel appeared in a brilliant light above them. He had the plates in his hands and turned them over one by one, showing the men the symbols engraved on each page. A table appeared beside him, and on it were ancient artifacts described in the Book of Mormon: the interpreters, the breastplate, a sword, and the miraculous compass that guided Nephi’s family from Jerusalem to the promised land.

When the angel departed, Joseph walked deeper into the woods and found Martin on his knees. Martin told him he had not yet received a witness from the Lord, but he still wanted to see the plates. He asked Joseph to pray with him. Joseph knelt beside him, and before their words were half-uttered, they saw the same angel displaying the plates and the other ancient objects.