Why Was Peter Whitmer Jr. Chosen to Witness the Gold Plates? 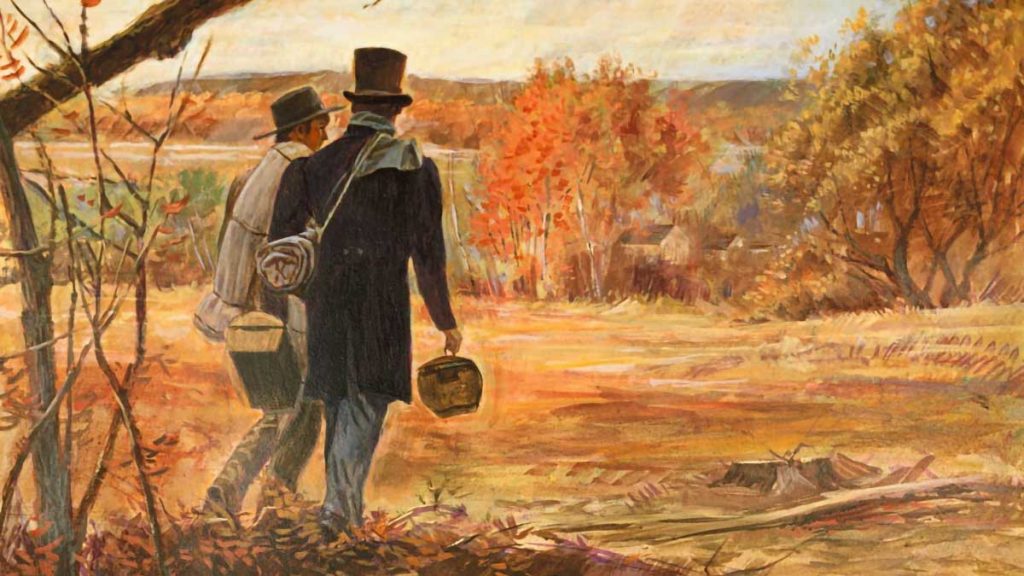 “Joseph Smith, Jun., the translator of this work, has shown unto us the plates of which hath been spoken, which have the appearance of gold”

Shortly after Joseph Smith and Oliver Cowdery arrived at the Whitmer farm in Fayette in early June 1829, members of the Whitmer family desired Joseph to seek revelations on their behalf.[1] Among them was Peter Whitmer Jr., who was 19 years old at the time, four years younger than the Prophet. Through Joseph, the Lord told young Peter, “the thing which will be the most worth unto you will be to declare repentance unto this people, that you may bring souls unto me, that you may rest with them in the kingdom of my Father” (Doctrine and Covenants 16:6). Soon thereafter, Peter was among the few baptized before the formal organization of Christ’s restored Church in April 1830.[2]

A few months after the Church was organized, Peter was called to travel with Oliver Cowdery, and to “open your mouth to declare my gospel” (D&C 30:5). Peter and Oliver were joined by recent converts Parley P. Pratt and Ziba Peterson on what became known as “a mission to the Lamanites” (see D&C 32).[6] Peter and the other missionaries entered into a solemn covenant “to go to the Lamanites, and to assist in the … glorious work and business” of “proclaim[ing] glad tidings of great joy unto them, by presenting unto them the fulness of the Gospel.”[7]

This mission proved consequential for the growth and progress of the Church. For Peter, it was one of his earliest opportunities to go forth and publicly proclaim his witness of the Book of Mormon. In his own, brief account of their travels, Peter simply stated that when preaching, “We declared the Book of Mormon.”[8] Peter was also present, and surely testified, when Sidney Rigdon was first introduced to the Book of Mormon.[9] Various sources indicate that Peter and Oliver specifically testified of their experiences seeing the plates.[10] Together, their testimonies could pack a powerful one-two punch.

Lyman Wight, for instance, remembered meeting the missionaries as he was about to leave on “business … of vital importance.” Impressed by their good-natured persistence, he decided to stay and attend a meeting where the missionaries shared their message. Wight recalled, “One [Oliver] testified that he had seen angels, another [Peter] that he had seen the plates, and that the gifts were back in the Church again.”[11] This combination of testimony captivated Wight, and he left that meeting much later than he had anticipated, and joined the Church soon thereafter.[12]

As a result of the labors of Peter and his fellow missionaries, Ohio became the first gathering place of the Church. As the Church grew, Peter continued to bear witness of the Book of Mormon and the Latter-day Saint work. For example, at an October 1831 conference, Peter said, “Ever since I have had an acquaintance with the writing of God”—surely including the Book of Mormon—“I have [viewed] eternity with perfect confidence.”[13] At this conference, Peter reportedly joined his fellow Book of Mormon witnesses in bearing “their solemn testimony to the truth of that book” with their right-hands uplifted.[14]

Peter joined the rest of the Whitmer family in Missouri, where they and other Saints sought to build up Zion. He faithfully endured the mob violence that drove them out of Jackson County in 1833. One woman who lived amid the Saints in Jackson County in the 1830s later remembered Peter Whitmer as being among those “testifying that they had seen the plates, and had handled them with their hands.”[15]

Tragically, Peter died in September 1836 of tuberculosis in Liberty, Missouri, just a few days before his 27th birthday. His brother-in-law and mission companion Oliver Cowdery wrote a touching tribute to Peter and his brother, Christian Whitmer, who had passed away a year earlier. According to Oliver:

[Peter and Christian] were the first to embrace the new covenant, on hearing it, and during a constant scene of persecution and perplexity, to their last moments, maintained its truth—they were both included in the list of the eight witnesses in the book of Mormon, and though they have departed, it is with great satisfaction that we reflect, that they proclaimed to their last moments, the certainty of the former testimony: The testament is in force after the death of the testator. May all who read remember the fact, that the Lord has given men a witness of himself in the last days, and that they, have faithfully declared it till called away.[16]

Among the Eight Witnesses, only two were younger than Joseph Smith—his brother Samuel H. Smith and Peter Whitmer Jr.[17] In fact, born in 1809, Peter was the youngest of all the Book of Mormon witnesses. What led to such a young man being selected for the important and sacred responsibility of being a witness? Why not choose someone older, more mature, established, and trusted in the community, such as Peter Whitmer Sr., the patriarch of the Whitmer family? Peter Jr. must have displayed an impressive amount of maturity and faith to receive this special privilege and duty.

Hints of this maturity are scattered throughout his brief years of Church service before his untimely passing. First, the moment he met the Prophet Joseph Smith, he desired an answer from God about “that which would be of the most worth” for him (D&C 16:4). And as a faithful young adult, he voluntarily stayed in Palmyra during the printing process to help secure the safety of the Book of Mormon manuscript, underscoring how important he considered its sacred words.

The fact that Peter was also selected to participate in the fledgling mission to the Lamanites, when the Lord could have chosen one of his older brothers, illustrates that he had faith and maturity beyond his years, as have many missionaries who are likewise called today to serve the Lord under difficult circumstances. Peter dutifully fulfilled his charge, combining his testimony of the plates with Oliver’s witness of angels to powerful effect among the people of Ohio.

After his mission, as a 21-year-old, he could testify in front of a large congregation that he looked to “eternity with perfect confidence.” His resolve in this regard was no doubt tested in the following years, as he endured the persecutions of Missouri. While older, ostensibly more mature converts lost faith in the 1830s, Peter held fast to what he knew to be true. His steadfast witness of the Book of Mormon through all these experiences proves that despite his youth, Peter Whitmer Jr. was indeed the right choice for inclusion among the Eight Witnesses.

Peter is often overshadowed by his longer living brothers David and John Whitmer, who held more visible leadership roles in the early years of the Church. Yet all who read and love the Book of Mormon today should join Oliver Cowdery in reflecting “with great satisfaction” on the life and faithful testimony of Peter Whitmer Jr.

[1] On the timing of the revelations to David, John, and Peter Whitmer Jr., see John W. Welch, “The Miraculous Timing of the Translation of the Book of Mormon,” in Opening the Heavens: Accounts of Divine Manifestations, 2nd edition, ed. John W. Welch (Salt Lake City and Provo, UT: Deseret Book and BYU Studies, 2017), 110.

[3] Rachel Cope, “Whitmer, Peter Jr.,” in Doctrine and Covenants Reference Companion, ed. Dennis L. Largey and Larry E. Dahl (Salt Lake City, UT: Deseret Book, 2012), 679, states that Peter “occasionally served as one of his scribes during the Book of Mormon translation.” None of the text in the surviving portions of the original Book of Mormon manuscript is identified as being in Peter’s handwriting, however, so this cannot be verified. See also Susan Easton Black, “Peter Whitmer Jr.,” in Restoration Voices Volume 1: People of the Doctrine and Covenants (Springville, UT: Book of Mormon Central, 2021).

[6] See Richard Lloyd Anderson, “The Impact of the First Preaching in Ohio,” BYU Studies 11, no. 4 (1971): 474–496, reprinted in Oliver Cowdery: Scribe, Elder, Witness, ed. John W. Welch and Larry E. Morris (Provo, UT: Neal A. Maxwell Institute of Religious Scholarship, 2006), 195–220; Richard Dilworth Rust, “A Mission to the Lamanites,” in Revelations in Context: The Stories Behind the Sections of the Doctrine and Covenants, ed. Matthew McBride and James Goldberg (Salt Lake City, UT: The Church of Jesus Christ of Latter-day Saints, 2016), 45–49.

[7] Covenant of Oliver Cowdery and Others, October 17, 1830, online at josephsmithpapers.org.

[14] “History of Luke Johnson (By Himself),” Deseret News, May 26, 1858. Johnson’s recollection that all eleven witnesses testified of the Book of Mormon at this conference is mistaken, since at least two (Christian Whitmer, Hiram Page), and possibly a third (Jacob Whitmer) were not in attendance. Presumably, the eight (possibly nine) of the eleven witnesses who were in attendance affirmed the Book of Mormon as Johnson described. Understandably, after nearly three decades, Johnson likely remembered seeing those witnesses who were present (which was most of them) stand and affirm their testimony, but had forgotten the exact number and did not recall that some were not in attendance.

[17] This is pointed out in Michael Hibbard MacKay and Gerrit J. Dirkmaat, From Darkness Unto Light: Joseph Smith’s Translation and Publication of the Book of Mormon (Salt Lake City, UT: Deseret Book and BYU Religious Studies Center, 2015), 152.

Book of Mormon Central, “Why Was Peter Whitmer Jr. Chosen to Witness the Gold Plates? (Testimony of the Eight Witnesses),” KnoWhy 600 (March 30, 2021). Used by permission.