I am now seventy-five-years-old. The Book of Mormon has held a prominent position throughout my life dating back to my earliest memories.

My family lived in a small branch in North Platte, Nebraska. My parents were both from staunch LDS backgrounds in Utah when my dad was transferred to Nebraska. Church members looked to my parents for example and instruction regarding everything to do with Church practices and gospel principles. My mother decided to prepare a flannel board presentation on the Book of Mormon. She spent hours cutting out artistic designations of ancient prophets, plates, and maps and preparing a large flannel board and attaching flannel to all of her figures and printed text. As the oldest child, she used me as her practice audience as she related the entire story of the Book of Mormon migrations, highlights and low lights, and plates. I thus became familiar with the entire story of the Book of Mormon. For about twenty-five years my mother gave that fabulous flannel board presentation to Relief Society, Sunday School, teacher development, and district or stake leadership groups.

We also owned Emma Marr Petersen’s Book of Mormon Stories for Young Latter-day Saints that told all the key stories with an accompanying illustration for each story. I loved reading that book throughout my elementary school years. Additionally, in weekday Primary, which was held in an upstairs bedroom of an old house where our branch met, our women teachers told the Book of Mormon stories week after week in serial fashion.

My family moved back to Salt Lake City when I was in high school. I was astounded that I knew so much more about the Book of Mormon than any of my peers. When I went on to BYU, I really enjoyed my freshman Book of Mormon classes.

That opportunity did arise as I prepared for a career in the LDS Church Educational System. Gratefully I have had the frequent chance to teach precious truths from this holy scripture in seminary, institute, and BYU Religious Education. A highlight in my teaching career was leading out in BYU’s Freshman Academy in teaching Book of Mormon each semester to precious eighteen-year-olds just embarking in their high education. I’ve also had the privilege of writing a few articles for publication on Book of Mormon themes.

The Book of Mormon and its contents have been the foundation of my faith throughout my adventures and frequent tensions of life as a parent, teacher, and writer. Nephi’s words resonate with me: “Wherefore, ye must press forward with a steadfastness in Christ, having a perfect brightness of hope, and a love of God and of all men. Wherefore, if ye shall press forward, feasting upon the word of Christ, and endure to the end, behold, thus saith the Father: Ye shall have eternal life” (2 Nephi 31:20). 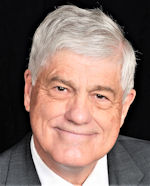 Today is Karen’s birthday. Tomorrow is my birthday. I am one year older than she, but for one day of the year, we like to say that we are the same age. Early January has another celebratory date for us. On January 3, 1969, fifty-two years ago, we were married in the Los Angeles Temple.

Karen and I have been blessed with five children: Stephen Bruce, Kaye Darlene, Michael Joseph, Rachel Diane, and Matthew James.

I was born January 10, 1946, in the LDS Hospital in Salt Lake City to Arthur and Lois Gee Van Orden. I was one of the nation’s original “war babies,” my father having completed over four years’ service during World War II and marrying my mother in the Salt Lake Temple upon his return to Utah. I am a fifth generation Latter-day Saint. I am the oldest child of five boys and one girl.

Karen was born January 9, 1947, to James and Winona Christensen Hoyal in Alhambra, Los Angeles, California. Her parents were part of the LDS out-migration from Utah to California prior to the war. Karen is the eighth child of seven boys and four girls.

My father was a law enforcement officer for the Union Pacific Railroad. In 1952 he was transferred to North Platte, Nebraska, where we lived until 1961 when he was transferred back to Salt Lake City. My nine and a half years in Nebraska were exceptionally formative for me in developing my talents and my testimony of the restored gospel of Jesus Christ. North Platte is a sacred place for me; Karen and I have visited there numerous times. I graduated from Skyline High School in Salt Lake in 1964 and went on to BYU before serving in the South German Mission from 1965 to 1967.
Karen’s family had moved earlier a few miles east of Alhambra to El Monte. She grew up there and graduated from El Monte High School in 1964. Her family lived on Utah Avenue, so named by the Latter-day Saints who chose to move on to that new street and where a new chapel was built 200 feet south of the Hoyal home. Karen’s father was bishop through most of her youth. She started at BYU winter semester 1965.

Karen and I met in the BYU 36th Ward after my mission. We were engaged in April 1968 while both of us still had over a year left in our education. My parents felt we should wait to be married until after we graduated, but we persisted. For income, I taught German-speaking missionaries in the Language Training Mission, and Karen worked for BYU Catering. I also had a good-paying labor job in California while living at Karen’s parents’ home the first summer of our marriage. We graduated the same day in late May 1970. She was pregnant with Stephen at the time. I majored in German and minored in History and obtained a teacher’s certificate. Karen majored in Music Education and obtained a teacher’s certificate. My goal was to become a teacher in the Church Educational System.

I started my career as a seminary teacher adjacent to Skyline High School in August 1970. After three years I was transferred to southern California where I taught institute from 1973 to 1979. We moved back to Utah in 1979 when I became a seminary and institute curriculum writer at Church headquarters. Along the way I obtained my M.A. at BYU in Ancient Scripture and then my Ph.D. in History, also at BYU, in 1986. Back in those days, it was common for CES teachers to get their higher degrees at BYU because of free tuition and the chance to teach there part-time. But it is kind of embarrassing to say that I obtained all my degrees at the same institution.

I became a professor of church history and doctrine at BYU in 1986. I was grateful for the chance to teach wonderful students all the courses in Religious Education curriculum. I maintained close relations also with the History, German, and Political Science departments. As a family, we taught away from the Provo campus three times: as faculty adviser to BYU Washington Seminar in 1988, as director of BYU Vienna Study Abroad in 1992, and as an Old Testament and New Testament professor at BYU’s Jerusalem Center, 1996-1997.

We lived in Lindon for thirteen years and have resided here in Springville for the last twenty-seven years. We have experienced numerous ward boundary changes.

After returning from Jerusalem, Karen returned to BYU and obtained an endorsement in Special Education. In 1998 she began her sixteen-year teaching career as special education teacher at our nearby Springville High School. She received teaching awards and was highly acclaimed by her students and their parents for her devotion to the students and their specific needs.

I have enjoyed teaching in the Church in the various organizations. I have also served in a stake mission presidency, in five different stake high councils, a curriculum writer for gospel doctrine and family home evening manuals, a member of the general Church committee for the Pioneer Sesquicentennial, as director of the Springville Family History Center, and as bishop of both the Lindon 6th Ward and the BYU 21st Ward, a singles ward. Karen has served as a teacher in the different organizations and as a primary and relief society president.

Karen and I are dedicated to writing family history accounts and short stories. We also visit and photograph our own family history sites as well as locations in many states and other countries where our ancestors lived.

My advice to future generations: Be open and honest about your human condition. We are all flawed human beings totally dependent upon our Lord Jesus Christ for redemption. Follow our Savior’s injunction to not judge others and to love all our fellow beings. “All Are Alike unto God.” Leave all people, places, and things better than you found them.