“Dispute not because ye see not, for ye receive no witness until after the trial of your faith.” (Ether 12:6)

One day, when I was nearly seventeen, I was leaning over the counter in the kitchen reading the LDS Church News, which ran a cartoon strip that day depicting events from the Book of Ether in the Book of Mormon. I read the passage, “Dispute not because ye see not, for ye receive no witness until after the trial of your faith.” That admonition struck a particularly responsive chord and I realized that I had things backward. Instead of demanding proof first, this scripture was telling me I should try to exercise faith first; the assurance would then come after my faith had been tried. One effect of reading this scripture was to make me generally more optimistic. It was the start of a conscious shift of direction, a willingness to try first and expect proof later.

The Book of Mormon itself stands for me as a persuasive artifact, because of the many witnesses who speak to the physical presence of the gold plates; the short time in which it was translated; and particularly the chiastic form in which much of the Book of Mormon is cast. This and the power with which it speaks to my soul all lead me to believe the book is everything Joseph Smith said it was. 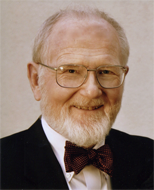 Edward L. Kimball’s childhood was spent in Safford, Arizona. When he was thirteen, he and his family moved to Salt Lake City. After graduating from high school and finishing two years at the University of Utah, he served as a missionary for the Church of Jesus Christ of Latter-day Saints in the Netherlands.

After finishing a bachelor’s degree in history he continued on to graduate top in his class at the University of Utah Law School. He continued studies at the University of Pennsylvania, earning a further doctorate of law. Professor Kimball taught evidence and criminal procedure at the Montana State University in Missoula for about five years, and then taught at the University of Wisconsin in Madison for 12 years. When Brigham Young University opened a law school, the administration there invited him to come as a member of the original faculty. He was a law professor at the J. Reuben Clark Law School at BYU, holding the Ernest L. Wilkinson Chair, from 1973 to 1995, when he retired.

He has written biographies that have been described as “well crafted” and have been listed among “60 Significant Mormon Biographies.” He wrote an article on Henry Eyring and Harvey Fletcher published in Dialogue: A Journal of Mormon Thought, and has published an in-depth study on the 1978 Revelation on the Priesthood. He has also written an article on the history of LDS temple admissions standards. In retirement, he has continued authoring family biographies and papers on Church history.

He and his wife, Evelyn Bee Madsen, are the parents of seven children.