Eric Samuelsen
In Mormonism, we’re supposed to ‘bear our testimonies’ that the ‘Book of Mormon is true,’ that the ‘Church is true’ and that we’re led by ‘a prophet on the earth today.’ In fact, saying we believe in God is considered inadequate: we ‘know God exists and that He has restored His Church to the earth today.’ I know all those phrases, have used them in Church my whole life. But the more I think about them—and I do think about them, about the language of our worship—the more strange they seem, even divorced from reality, and that seems a shame, because Mormonism strikes me as a fundamentally practical religion. There’s even a sort of earthiness to it, not least because we are unique among Christian faiths in thinking God has a body.

‘Bear my testimony’ suggests a legal proceeding: I ‘bear witness’ of events I presumably personally experienced. But is that really what we do when we bear testimonies in Church? What are testifying to? It seems to me that we’re testifying to a certain narrative: the First Vision, the Restoration of the Church, the Golden Plates and their translation. We’re saying, in essence, that certain historical events really happened. We weren’t there, and all the people who were there are long dead. But they happened, we attest that they happened, and in the officially approved versions published by the Church. We can’t really say any of that, can we? Surely, at most, what we’re saying is ‘I received a spiritual manifestation that persuades me that these events took place.’ We’re saying that we prayed, and feelings resulted that seemed to us to have been externally generated.

We also testify that the Book of Mormon is true. Again, this seems to me a rather strange thing to say. We don’t talk that way about any other book. I don’t say ‘Middlemarch is true,’ or ‘Hamlet is true.’ We don’t really even say that something like Kant’s Critique of Pure Reason is true, or Newton’s Principia is true. We might think Kant’s discussion of the categorical imperative is enlightening; we might even think he got it right. But we don’t really say ‘that book is true.’ We may have also noticed that a body at rest tends to remain at rest unless acted upon by an external force. But we don’t say the book describing that principle is ‘true.’

When we say the Book of Mormon is ‘true,’ in other words, we’re saying something pretty complicated. The Book of Mormon might be ‘true’ in the sense that it describes people who really lived, a civilization that actually existed. It might be ‘true’ in a theological sense—the sermons included in its pages accurately describe God and how He wants us to serve Him and each other. It might be ‘true’ in an existential sense—this book came into being in a particular way, involving Golden Plates and an angel and a Urim and Thummim. It might be ‘true’ in a spiritual sense. In fact, I think that’s how we generally understand it. Of course, we also think there really were Golden Plates and that there really were Nephites. But that’s all just assumed, unexamined. We’re supposed to read the Book of Mormon for a certain amount of time each day—fifteen minutes, a half hour—as an act of devotion. It’s how we develop spiritual discipline. It’s our rosary, it’s our mantra. It’s not like other books. We’re not supposed to read it for pleasure, for a story, for its prose. We can, of course, but that’s not the point.

In the earliest days of the Church, the fact of the Book of Mormon was probably more important than anything in it. Someone, Brigham Young or Heber C. Kimball or Edward Partridge, would be given a copy of the Book of Mormon, they’d read it in one sitting, and they’d immediately ‘know’ it was ‘true.’ The Spirit spoke to them.
On my mission, thoughts sometimes popped into my head unbidden, suggesting that I act in certain ways, that I do something or other. Usually, I would do it, and usually it would work out pretty well. The same thing happens now—thoughts just pop into my head. My daughter has a fever and a sore throat, but it’s the weekend, we can’t see our regular doctor for a day or so. Should we take her to emergency? I lay my hands on her head, and a thought occurs to me—she’s pretty sick, but we can wait until Monday. Meanwhile, we should go to the store and get a can of chicken noodle soup. We should give her ibuprofen and a fruit smoothie. Would I have reached those conclusions anyway, on my own? Quite possibly. But they did pop into my head while I was praying, my hands laid on my daughter’s head.

Sometimes when I read the Book of Mormon, it seems pretty obviously to be a nineteenth-century text. When I read Mosiah 2-4, however, I think I’m reading the words of a real man. King Benjamin lives for me. So does the Jacob of 2 Nephi 2-4, and the Nephi of 2 Nephi 25-33. So does the heartbreaking Mormon of Moroni 9. But Moroni 8? Why on earth would a Mesoamerican worry about infant baptism? So do I believe the Book of Mormon is ‘true?’ Can that conclusion remain tentative forever?

I feel like Saint Augustine, cheering in his school of philosophical disputes whenever those arguing for the immortality of the soul won the day. I have a rooting interest. I think the notion that the Book of Mormon is genuinely an ancient text is, at best, improbable. But that’s the side of the story I want to have win. Meanwhile, my daughter’s fever is in fact subsiding. And so that worked again.

Or it didn’t: I can talk myself out of a testimony pretty easily. It’s harder to talk myself into one. I can’t read scripture purely, uncomplicatedly. Fifteen minutes a day doesn’t work for me; I’m filled with too many questions. It’s better to just read, like I’d read any book, just let the narrative flow. So do I ‘know’ the Book of Mormon is ‘true?’ No. I believe that by reading it, I will feel things I don’t ordinarily feel. Some tranquility, perhaps, some compassion, some connection to Nephi and Benjamin and Ammon and the Savior. Characters in a story, words on a page. But also thoughts in my head, feelings in my heart.

I can’t just feel the spirit. I have to work through doubt, come to the edge of the cliff and see the white water break on the rocks below. That’s when I can sometimes close my eyes and jump. When I most need God to catch me, He does. Like a high soprano descant on top of a four-part chorus, I hear Him, beauty layered over doubt. 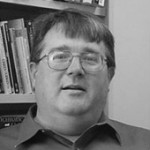 Eric Samuelsen is a playwright, director, and critic. His plays include Gadianton, Family, The Way We’re Wired, and Amerigo. He’s been on the faculty at BYU since 1992, and has headed the playwriting program since 1999. He has a PhD from Indiana University, and is a recognized Ibsen translator and critic. Professor Samuelsen served two terms as president of the Association for Mormon Letters. He’s been married for thirty years, and he and his wife, Annette, have four children.