My view of the world and the gospel has been deeply affected by my upbringing. My family traveled constantly during my early years; I attended schools in Taipei, Tehran, and Athens before returning to the U.S. for junior high and high school. The impact of those years is distilled in my memory of a chance meeting I had with a ten-year old Palestinian boy, outside our hotel in East Jerusalem (as it was called in 1963). I don’t remember exchanging a word, but I do remember looking into his eyes and recognizing he had a different existence than I did. Ever since then, I have had to square my existence and my beliefs with the fact that the world is wide and varied; that the happiness and well-being (here and hereafter) of every other person who has, or does, or will live on it means as much to my Heavenly Father as my own.

Returning to Carbon County, Utah, as a seventh grader, I had little in common with those around me. I took refuge in sports and studies as I had done when we moved between places overseas. But I began to get in touch with the Mormon roots of my mother’s family. It wasn’t until we moved to California that I first heard the story of Joseph Smith’s vision, sitting in a Sunday School class. Some time later I learned about the Book of Mormon, which would become the key to my spiritual life and the way to stay true to my own vision of a young Palestinian and the world he represented.

I love the Book of Mormon for many reasons. I have felt its power affect the life of my family on a day-to-day basis. It speaks in clear, strong ways about the doctrine of Christ. But what I would emphasize here is how deeply moved I am by the very idea that such a book exists: that another scripture, from a different time and place, testifies that Jesus is the Son of God. The Book of Mormon teaches as well that other books of scripture will yet come forth. This is a simple, powerful idea: that God is mindful of all peoples, in all times and places. It reaches out and fills the horizon. It brings unity and purpose to life as I know it and feel it. The Book of Mormon means that I can believe in and testify of an all-embracing Father in Heaven, who has always known and loved my young Palestinian friend as well as He has known and loved me, and that every person who has ever lived holds a place in His plan of salvation. 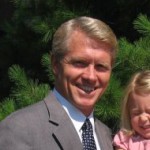 Frederick W. Axelgard is a husband and the father of five children, and grandfather to six grandchildren. He received his PhD in international studies from the Fletcher School of Law and Diplomacy at Tufts University. His professional career has focused on the politics and security of the Middle East, during which he served in the U.S. Department of State and at the Center for Strategic and International Studies in Washington. D.C. For the past decade he has been a director and vice president with responsibility for Middle East business development in General Dynamics Corporation.