While I was a graduate student pursuing a doctorate in philosophy, one of my professors was surprised to hear that I was a practicing Mormon. He was puzzled by the fact that I was both a serious graduate student and a serious believer. He could not understand how someone interested in philosophy could believe in angels, gold plates, and the other elements of LDS faith. So he asked me about it, wondering how I reconciled my religious beliefs with my interest in philosophy. He saw the two as incompatible. I must confess that I was surprised by his questions. Even though I had always known that someone would ask me about my faith and I often thought about what to say, I was never able to think of anything that I thought would satisfy a philosopher. At that moment, I simply said that I had had certain experiences that I could not deny. While I did understand that what I studied and my faith were often in conflict with each other, I could not deny the experiences that I had when I first investigated the LDS Church. My professor was impressed by the honesty of what I said and in response said that, if it was important to me, he would respect that and treat it seriously too.

I have thought about that moment ever since. I first heard about the LDS Church and Mormons when I was in high school. At the time I was not particularly religious and I was not looking for a religion. But I did have questions about life and its meaning, about morality, and about those aspects of life that make it meaningful for us. As I read Joseph Smith’s account of what happened to him, the revelations and visits that he received, I was impressed with his honesty. I recognized that I shared with him a yearning for something higher and better. As I read the Book of Mormon I found myself touched by its message, finding in it answers to questions that I had been thinking about. During this time, I also found out that interest in Mormonism raised a great deal of opposition. As I read about Joseph Smith and the Book of Mormon, people suddenly confronted me with phone calls, pamphlets, and books trying to dissuade me from pursuing it any farther. All of these experiences affected me deeply and I found myself often in prayer asking for direction. The one constant in these moments was how impressed I had been with Joseph Smith’s story and in actually reading the Book of Mormon. It was not long before I had those spiritual experiences that whispered to my soul of the truthfulness of the Book of Mormon, of Joseph Smith and his experiences, and most important, that God the Father and his Son Jesus Christ live today and are speaking to us through prophets.

People are still surprised to find out that I am a Mormon who takes his religion seriously. They are surprised that someone with a doctorate in philosophy would also be a serious believer. Most of all they struggle to understand how anyone could believe the basic story of the Mormons. While I do understand the surprise, I also know that their surprise is often occasioned by the fact that they know little about Mormons or our faith. My faith has been a constant source of encouragement and it has sustained me in my pursuit of knowledge.

Many academics today are suspicious of religious belief, seeing in it an attempt to hobble the mind and prevent it from learning. They see it as undermining the search for truth and limiting human potential. But my experience as a Latter-day Saint has never been like that. From my earliest association with members of the Church, no question was ever out of bounds. No religion has confronted questions and criticisms like the LDS Church. One of the aspects of my faith is its willingness and patience in answering any and all questions and criticisms about our faith. In addition, the Church has encouraged members to develop their scholarly talents in order to serve the members of the Church, as well as the community at large. In addition to that, my faith has encouraged me to learn all that I can. From the sciences to the humanities and fine arts, my faith has opened me up to the rich diversity of experiences that one discovers as one takes on the great questions about life, death, morality, and beauty.

It has become common today to hear people claim that history and religion conflict with each other. The same is said of science and religion, as well as philosophy and religion. I would add that history, science, and philosophy conflict with each other as well. On this I wholeheartedly agree. They are all in conflict. It is this conflict that makes the questions raised in these disciplines worth pursuing. Now, those who make this claim usually mean by this that religion is in conflict with the truth and that it requires one to sacrifice the intellect in order to meet the demands of some blind faith. It is one of the noblest aspects of my faith and my church that it has never demanded that I sacrifice my intellect for any reason, especially to keep my faith intact. There is no religious institution that is more committed to the education of its members than the Church of Jesus Christ of Latter-day Saints.

As a student at Brigham Young University I was introduced to the great books and the great ideas of the Western intellectual tradition. I read the great books from Plato to NATO and in my classes I learned about Darwin and evolution, Marx and historical materialism, Freud’s psychotherapy, and many other of the great ideas that define the Western tradition. I should add here that I also had classes that discussed the religious and philosophical thought of Asia. No idea was too radical to be studied and discussed. No book was censored. No limits were placed on the questions we could ask. What I learned from this was just how deep and broad the conflict was in terms of the intellect. I learned to engage it openly and honestly. I saw clearly the limits of the mind and the claims that it could make in terms of knowledge. Because of this I embraced the conflict and saw that my faith was up to the task of intellectual inquiry. I was not afraid of knowing the truth and I was able to see where my faith fit into the scheme of things. Most of all, I learned that faith is reasonable and contributes significantly to the life of the intellect. It was both humbling and liberating at the same time. Most of all, I appreciated the confidence that my church placed in me to go out and experience these things. I appreciated its confidence in its own foundations. In this respect, I think the LDS Church is to be admired for its commitment to education and extending the knowledge of its members. Latter-day Saints have made significant contributions to the liberal arts and sciences.

Before concluding I must touch on one last aspect of my faith that is most dear and precious to me. It is the Book of Mormon. The story of its coming forth and the contents of the book are understandably strange to people in this day and age. But no book is more in tune with the times and the human spirit than the Book of Mormon. It takes up all of the great questions, those of life and death, right and wrong, good and bad, freedom, truth, and most of all, whether there is a God. It is the equal to any of the great books that I have read and should be read even by those not disposed to believe it. It is a complex and surprising book, one that is capable of leading the reader to reflect more deeply on the questions of life and to consider how to live it well. Much of what I have learned has been because I have used the Book of Mormon as a standard against which I measure what I read and learn. It has made study and reflection a more engaged experience and it provides a reliable way to measure the words and arguments found in the great books of the Western tradition.

The Book of Mormon is central to my faith because it calls on us to consider the possibility that God once again speaks to human beings through living prophets. This is more than a mere sectarian claim. It is a return to the high intellectual debates that earlier centuries were invigorated by. That is something no other book can accomplish. It calls out for readers who are willing to take this challenge and to see whether it speaks the truth. It is a book that calls for brave readers, readers with an open mind who are willing to risk what they know. It is also a book that rewards those who do so, even if they do not accept its claims. In a world where there so much upheaval, the Book of Mormon speaks to us, helping us to see how we can cope with the demands that the world we live in places on us.

While my faith cannot reconcile the conflict between it and philosophy, it certainly has much to say to someone who is looking for answers to the great questions. In it, will find it honest and open to any inquiry that is sincere. To my friends and colleagues, I invite you to take a serious look at the things that Latter-day Saints believe and do. My faith has been a great blessing and a comfort to me in my life. In a dynamic world that experiences such rapid changes it offers an important perspective for people trying to find a point from which to navigate through life’s troubled seas. 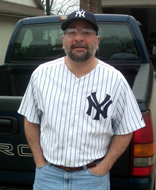 Ted Vaggalis is an associate professor of philosophy and interdisciplinary studies at Drury University, in Springfield, Missouri. He received a B.A. in political science from Brigham Young University and his M.A. and Ph.D. in philosophy from the University of Kansas. His interests focus on contemporary continental philosophy, political philosophy, and ethics.

Professor Vaggalis was the inaugural director of the Interdisciplinary Studies Center, the home of Drury’s signature Global Perspectives 21 curriculum, and he teaches all of the core courses within the Global Perspectives 21 curriculum. In 2005, he received the university’s Faculty Award for Liberal Learning, which recognizes a Drury faculty member who is committed to fostering the critical thinking and imaginative capacities that characterize liberal learning.

The future Dr. Vaggalis served in the Canada Toronto Mission under President M. Russell Ballard, and his son has recently been called to serve in the Peru Lima South Mission. He has set out some of his thinking on Mormonism and theology in “The Gospel and the Captive Woman,” in FARMS Review 18/1 (2006): 265-290.