William Waddoups
The following is a statement of William Waddoups, second counselor to Alma Merrill, Pres. of the Benson Stake, at Lewiston, Utah, and also at the grave of Martin Harris, Clarkston, Utah, Saturday, April the 20th, 1918. Present as visitors at the conference who heard the statement were Elder Richard R. Lyman, of the council of the Twelve, and President Joseph McMurrin, of the First council of the seventy, the latter at the time making a stirring address on the labors performed by Martin Harris:

Edward Stevenson was sent back East to get Martin Harris. One week after the arrival of Edward Stevenson with Martin Harris, in Salt Lake City, Elder Anson Call asked me if I desired to see and meet Martin Harris. I went to Salt Lake City where I found Brother Anson Call and he introduced me to Martin Harris. “To me Martin Harris said: ‘Sit down on that couch.’ I sat on the couch as instructed, while Martin Harris stood on the opposite side of the room. Martin Harris then spoke to me as follows. ” ‘Young man, I had the privilege of being with the Prophet Joseph Smith, and with these eyes of mine,’ pointing to his eyes, ‘I saw the angel of the Lord, and I saw the plates and the Urim and Thummin, and the sword of Laban, and with these ears,’ pointing to his ears, ‘I heard the voice of the angel, and with these hands,’ holding out his hands, ‘I handled the plates containing the record of the Book of Mormon, and I assisted the Prophet in the translation thereof. I bear witness that this testimony is true.’ “Martin Harris was at that time but a combination of bones and skin. He was extremely thin. Holding out his hands he said: ” ‘When I was faithful in the church I was a fleshy, healthy, robust man, and what you see left of me is the fruits of apostacy. Young man, always be faithful and obedient to the presiding priesthood, and you will always be safe.’

The following paragraphs and footnote are excerpted from a paper delivered by Bruce Van Orden (great-grandson of William Waddoups) at the Mormon History Association in Logan, Utah, in 1988. The title was “William Waddoups: Case Study of a Prominent British Immigrant and Cache Valley Entrepreneur, Bishop, and Patriarch.”

In 1869 Waddoups began renting farm land in Bountiful from Anson Call, an earlier friend of the Prophet Joseph Smith. William began to prosper and soon was able to buy a horse and buggy, a sign of some distinction. In 1867 Brigham Young had reestablished the School of the Prophets to formulate economic policies to counter any ill effects of the coming of the intercontinental railroad. In 1869 William Waddoups was invited to attend the school, which was even more a sign of distinction. Anson Call and William Waddoups drove weekly to the school together in William’s buggy.

One Saturday in 1870, Call asked William to hitch up his buggy and together they would go to Salt Lake and pay a call on Martin Harris, one of the early benefactors of Joseph Smith and a witness to the Book of Mormon, who had just arrived in Utah. This visit to Harris made a profound impression on young Waddoups. Ever after throughout is own long life, he loved telling the story of hearing Martin Harris’s testimony of seeing an angel of God. He told the story to his friends, to several congregations in church, and to his family, including his many descendants. The story goes like this, quoting Harris: “Young man, I had the privilege of being with the Prophet Joseph Smith, and with these eyes of mine,” pointing to his eyes, “I saw the angel of the Lord, and I saw the plates and the Urim and Thummim and the sword of Laban, and with these ears,” pointing to his ears, “I heard the voice of the angel, and with these hands,” holding out his hands, “I handled the plates containing the record of the Book of Mormon, and I assisted the Prophet in the translation thereof. I bear witness that this testimony is true.” Harris also told Waddoups that that frail man speaking to him was the “fruits of apostasy.” “Young man,” Harris warned William, “always be faithful and obedient to the presiding priesthood, and you will always be safe.”[22]

[22] William Waddoups, “Martin Harris and the Book of Mormon,” Improvement Era 26 (September 1923): 980. Waddoups also told the same story to Ricks in 1927. My father and his siblings all fondly remember their grandfather telling this story. This experience of his grandfather was one of the last things my father wanted to relate to me (reflecting his own testimony of the gospel) at his death bed in 1980.

This same story is also recorded in Martin Harris: Uncompromising Witness of the Book of Mormon by Susan Easton Black and Larry C. Porter, page 436.

Posted February, 2021 based on materials from Bruce Van Orden. 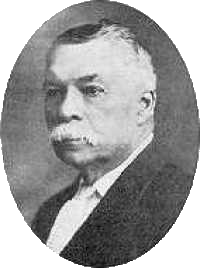 William Waddoups was born 19 August 1840 in Sowe, Warwickshire, England. William was the first of nine children born to Thomas Waddoups and Elizabeth Porter. His father was a tenant farmer, who rose in trust with his landowner and became a wagoner (one who had a responsi-bility for taking care of the horses).

Mormonism came into the lives of the Waddoups family in the late 1840s. Missionaries at that time were accustomed to holding street meetings, standing on corners singing songs and preaching to anyone who would stop to listen. William’s mother Elizabeth heard them at one of these meetings and became interested in their message. Missionaries held public meetings in Coventry and often Elizabeth would walk the five miles to attend them. William, still a small child, would cling to her hand or clutch her skirt and go with her. Elizabeth was baptized in 1848, which brought about much persecution upon her from her neighbors and friends. Even her husband, a Catholic by birth, was prejudiced against this new church and would occasionally lock doors against Elizabeth and William when they returned from attending Mormon meetings. Elizabeth persevered in her faith, however, and had her new little babies blessed in turn by the Mormon elders. In spite of his father’s opposition, William submitted himself at age thirteen on 25 March 1854 to baptism. Gradually Thomas overcame his preconceived ideas and commenced a study of Latter-day Saint doctrine. He too became converted and was baptized 20 April 1856.

The Waddoups family all contributed savings to send William, the oldest child, to Utah first. Gradually others in the family could accumulate enough money to go as well. William emigrated in 1863, his sister Mary Ann a year later, and Thomas, Jr. in 1866. At the age of nearly twenty-three, William booked passage on the ship Amazon, which departed the London harbor 4 June 1863 and arrived in the New York harbor 18 July 1863. “On account of the Civil War then raging between the states,” William reminisced to historian Joel E. Ricks later in life, “we could not get passenger cars from New York to Florence, Nebraska, and were compelled to ride in cattle cars for three or four days.” “Church Trains,” ox-team companies commissioned by the Church to go “down and back” to the Missouri to pick up immigrants between 1861 and 1868, met the European immigrants at the pick-up point. The company left 11 August and was the fourth of five “trains” to leave Florence that year. Although raiding Indians were becoming increasingly more menacing to passing immigrants, this “company came through without any trouble,” arriving in Salt Lake City 13 October 1863.

William Waddoups began to work immediately in Bountiful for William S. Muir, whom he had known as a “pastor” for the Church in the Birming¬ham-Coventry area in England. A few months after beginning his work with Muir, William became acquainted with a young woman of English descent, Martha Page, who also came into the Muir’s employ as a maid. William and Martha were married 27 November 1864, in Bountiful. Martha had promised her dying mother that she would take care of her two-year-old brother James. With William’s consent, James Page, Jr., became a permanent member of this new family.

William and Martha Waddoups and their family become pioneering homesteaders in the Cache Valley community of Lewiston in March, 1875. William set up a machine shop on his farm and became a dealer for Consolidated Wagon & Machine Company. Later, as the twentieth century began, even though he was over sixty-years-old, he entered the sugar manufacturing business and was still active in it until the mid-1920s when he was well into his eighties.

William served as first counselor to Bishop William H. Lewis in the Lewiston Ward for eighteen years, Bishop for four years, Counselor to the Stake President for 16 years and Stake Patriarch until 1928. When William was called into the bishopric, he was also charged with complying with the law of plural marriage. Martha gave her approval to William to marry plurally and also agreed with his choice for a new wife: Eliza Ann Stephenson, twenty-year-old treasurer of the Y.L.M.I.A. in the Lewiston Ward. William took both Martha and Eliza Jane to Salt Lake City to the Endowment House. There Martha placed the hand of Eliza on the hand of William Waddoups to be his second wife, to be sealed to him even as she (Martha) was for time and eternity. William and Eliza Jane went on to have a total of fourteen children, only nine of which lived beyond infancy.

William Waddoups died 14 November 1931 at the age of ninety-one. The Lewiston First Ward Chapel was flocked to overflowing at his funeral. Hundreds came to give tribute to “the great builder and healer of spirit and body, the great counselor and teacher, beloved of all.”