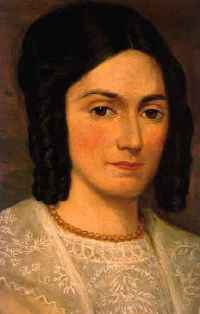 Emma was born on 10 July 1804, the seventh of nine children, and grew up in Harmony, Pennsylvania. She was well-educated and even had an extra year of school outside of the normal grammar school.

Emma met Joseph Smith for the first time in 1825. Joseph was smitten with her, which wasn’t surprising since she had grown up to be a tall, attractive woman with a dark complexion, brown eyes, and black hair. She possessed a singular regal beauty of form and of character. Joseph boarded with Emma’s family for two years and twice asked her father for permission to marry her, but was refused.

Finally on 18 January 1827, Emma and Joseph were married without her father’s permission. After their marriage, the Hale family told them that they were always welcome in their home. On 15 June 1828, Emma gave birth to their first child; unfortunately, the little boy only lived a few hours. Emma nearly died from complications, and Joseph spent two weeks by her side while she recovered.

During the winter of 1828-1829 Emma helped Joseph translate the Book of Mormon by working as a scribe. On 28 June 1830, Emma was baptized a member of The Church of Jesus Christ of Latter-day Saints. In that same year, Joseph received a revelation for Emma, which can now be found in Doctrine and Covenants 25. In the revelation, Emma was asked to put together a hymnal for the Church. She fulfilled the Lord’s admonition, and the hymnal was printed five years later.

In February of 1831, Emma and Joseph moved to Kirtland. It was a hard time for Emma because she was six months pregnant and had just recovered from an illness. In April 1831, Emma gave birth to twins. The twins lived only three hours. A month later the Smith’s were able to adopt twins whose mother had passed away, they named them Julia and Joseph. On 24 March 1832, Emma’s husband Joseph was a victim of mob action. He was dragged from the house and tarred and feathered. The rest of the family suffered from exposure, after fleeing in the cold night air. Five days later, Emma’s adopted son, Joseph, died from exposure. In 1832 and again in 1836 Emma gave birth to sons. Both lived to adulthood. 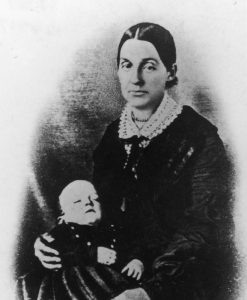 The Saints relocated in Missouri, yet another gathering. Emma, Joseph, and their three children settled in the Far West, and Emma gave birth to another son, Alexander Hale, in 1838. The Missourians rejected the Saints. Widespread violence ensued, culminating with the “Extermination Order” issued by Governor Boggs. The Saints fled to Illinois. While Joseph was imprisoned in Liberty Jail, during the winter of 1838-1839, Emma had to carry two babes in her arms and lead two other freezing children on foot across Missouri and the frozen Mississippi River to refuge in Quincy, Illinois. She carried the manuscript of Joseph’s translation of the Bible in pockets sewn into her skirt.

When the Saints began to settle in Nauvoo, Illinois, Emma and Joseph started out in a small house. Later, they built a home they called the Mansion House, which also served as an inn for travelers. Emma was diligent and selfless in caring for the sick in Nauvoo, as malaria and other illnesses were common. While in Nauvoo Emma gave birth to three more sons. The first two died in infancy and the third was born after Joseph was martyred in 1844. In 1842, Emma was elected as the first president of the Relief Society and helped many of the needy and poor. After Joseph’s death, Emma chose not to follow the Saints to Utah. Her chronic ill health and years of deprivation and hard work, in addition to her widowhood, probably contributed to her decision to stay behind. Her separation from the body of the Church in the last part of her life does not, however, take away from the important role she played in the history of the Church. Her mother-in-law Lucy Mack Smith wrote:

I have never seen a woman in my life, who would endure every species of fatigue and hardship, from month to month, and from year to year with that unflinching courage, zeal, and patience, which she has ever done (Lucy Mack Smith, History of Joseph Smith Revised and Enhanced, Bookcraft, 1996).

On 23 December 1847, Emma Smith married Lewis Bidamon, who was not a member of the Church. Bidamon was support for Emma in raising her five children. He remained her companion until her death on 30 April 1879 at the age of 75 in Nauvoo.