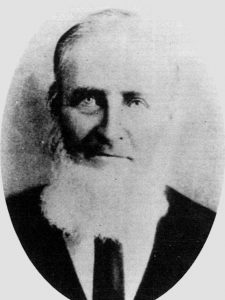 Josiah Stowell (sometimes spelled “Stoal”) was born on March 22, 1770 in Winchester, New Hampshire to Israel Stowell and Mary Butler. He was a member of the Presbyterian church. By 1791, he had married Miriam Bridgeman. He made his living as a farmer and sawmill owner.

Stowell was described as follows:

Deacon Isaiah [Josiah] Stowell,.. .a man of much force of character, of indomitable will, and well fitted as a pioneer in the unbroken wilderness that this country possessed at the close of the last century. He was one of the Vermont sufferers, who for defective titles, consequent on the forming a new State from a part of Massachusetts, in 1791, received wild lands in Bainbridge. He had been educated in the spirit of orthodox puritanism, and was officially connected with the first Presbyterian church of the town, organized by Rev. Mr. Chapin. He was a very industrious exemplary man, and by severe labor and frugality had acquired surroundings that excited the envy of many of his less fortunate neighbors. He had at this time grown up sons and daughters to share his prosperity and the honors of his name.

In October of 1825, he hired Joseph Smith to help him dig for Spanish treasure that was reported to be in the Ouaquaga Mountains of Harmony, Pennsylvania. Stowell came to Joseph as he had heard that Joseph had the ability to “discern things invisible to the natural eye.” The search for treasure was unsuccessful and ended by mid-November. However, while working on this project, the men lodged at the home of Isaac Hale, father of Emma Hale. This is how Joseph Smith first became acquainted with Emma. Joseph continued to court Emma while he did farm and millwork for Joseph Knight Sr. and Josiah Stowell. After Joseph and Emma married, Stowell gave them a ride to Manchester where they lived with Joseph’s parents.

Stowell was a houseguest at the Smith home at the time that Joseph obtained the golden plates in September of 1827.

He was a witness for Joseph Smith’s defense at court proceedings in South Bainbridge (later Afton), New York in 1826 and again in 1830. The charge in both instances was that of being a “disorderly person.”

He was baptized into the Church of Jesus Christ of Latter-day Saints in 1830. In early 1830, he was chosen along with Oliver Cowdery, Hiram Page, and Joseph Knight, Sr. to secure the copyright of the Book of Mormon in Canada. He stayed in New York rather than moving with the Saints to Ohio. Nevertheless, he remained a faithful member of the Church. He wrote to Joseph on December 19, 1843, telling him of his desire “to come to Zion the next season.” However, he died in Smithboro, New York on May 12, 1844.