Lucy Mack was born on July 8, 1775, in Gilsum, New Hampshire, the youngest of eight children born to Solomon Mack and Lydia Gates Mack. Lucy Mack’s family was religious and even evangelical. Her older brother Jason eventually formed his own religious community, and her two sisters both had spiritual experiences giving them confirmation that their sins were forgiven and that they should call others to repentance. Lucy’s father, after a bout of serious illness, experienced his own profound religious conversion, while her mother was ever a spiritual and moral leader in their home. Lucy Mack was born into a changing social atmosphere. Mothers had gained more importance in the home for rearing and training their children, and watching over their intellectual, moral, and religious development. At the same time, the social landscape was becoming more various, so that choices in the home could be more individual in relation to the leaning of the community. Meanwhile, both secular and religious writers were extolling the influence and power of women over the moral direction of society.

Lucy married Joseph Smith, Sr. on January 24, 1796. She brought with her a reasonable dowry provided by her brother Stephen and his business partner, plus the good moral example of her parents, and a solid grounding in religious faith. Her combined strength and spirituality made her perfect to be the matron of the religious movement that would be called Mormonism.

Lucy Mack and Joseph Smith, Sr. settled on one of the family farms at Tunbridge after their marriage in January 1796, and lived there for six years, during which time their first three children were born, including an unnamed son who died, Alvin, and Hyrum. Joseph Sr. opened a store there. A daughter, Sophronia, was born in 1803. After about six years of marriage, Lucy became seriously ill. Death seemed certain. Her sisters had succumbed to the same disease, which the doctors called, “confirmed consumption.” Lucy did not feel ready for death and judgment. She recounts: “I knew not the ways of Christ, besides there appeared to be a dark and lonesome chasm between myself and the Saviour, which I dared not attempt to cross” (Proctor, ed., p. 47). Near death, having visions of heaven, Lucy covenanted with God that if He would let her live to serve her husband and children, she would “endeavor to get that religion that would enable me to serve him right, whether it was in the Bible or wherever it might be found, even if it was to be obtained from heaven by prayer and faith” (Proctor, ed., p. 48). She heard the voice of Christ ratifying the covenant and encouraging her to believe in Him. From that moment, she began to recover. When her strength was regained, she began the quest to find religious instruction. Yet, she was disappointed again and again, even when witnessing sermons from pastors noted for their piety. After several years of searching, Lucy thought it might be easier to obtain spiritual peace, if she were baptized. She found a minister willing to baptize her, but into no particular church. She continued this way for over a decade.

Economic Trials and Relocating the Family

Lucy’s husband, Joseph, Sr., fell prey to dishonest businessmen and faced mounting debt. A series of financial setbacks and the loss of their farm in Tunbridge, forced him to move his family several times—they moved from Tunbridge to Royalton, then to Sharon in Windsor County. Joseph Smith, Jr. was born in Sharon, Vermont, in 1805. The Smiths returned to Tunbridge, where Samuel Harrison Smith was born in 1808. They moved on to Royalton, where a son, Ephraim, was born in 1810. Ephraim died in infancy. Another son, William, was born in Royalton in 1811. By the time of William’s birth, Joseph Smith, Sr. became more spiritually agitated. In spite of financial trials, Joseph Sr.’s spirituality grew. He experienced seven reported visions. Rather than join any of the faiths vying for converts in the region, he felt he wanted to reclaim a faith in the ancient, original church of Christ, an idea reinforced by the visions he experienced.

In 1811 the Smith family moved from Royalton, Vermont, to Lebanon, New Hampshire. Upon settling in New Hampshire, Lucy felt like the family was in the midst of economic recovery. She began laying aside stores and enrolled the eldest children in school. Another daughter, Catharine, was born in 1812. The family was successful until 1813, when typhoid fever struck the area, and all the Smith children fell ill. Sophronia was the most seriously ill, but was miraculously healed. Typhoid settled in the shoulder and then leg of Joseph Smith, Jr., resulting in bone surgery and many months of recovery. The epidemic killed 6,000 people in the Connecticut River valley. When the sickness and its attendant trials abated, the Smiths found themselves in “low circumstances.” The family moved to Norwich, Vermont, to work as tenant farmers. They experienced three successive years of crop failure in Vermont. A son, Don Carlos, was born there in 1816. The family relocated to Palmyra, New York. Joseph Smith, Sr. had gone ahead, and the man commissioned to transport Lucy and her children turned out to be unscrupulous. Lucy had to commandeer her own wagon, and she arrived in Palmyra with her eight children under her own power with “a small portion of my effects, my babes, and two cents in money” (Proctor, ed., p. 86). Some of the journey was made through snow, and the dishonest mover forced Joseph Jr. to walk on his injured leg.

Joseph Smith is Chosen to Restore the Gospel of Christ

It was in Palmyra, as the Smith family was investigating the local churches, that Joseph Smith, Jr. experienced what members of The Church of Jesus Christ of Latter-day Saints call the First Vision. In 1820, Joseph, then aged 14, had retired to the woods to ask the Lord which church was correct. He returned from the grove with news that would make the prior trials of the family seem trivial. The moment he confessed the vision to his favorite pastor, persecution against him and the family began, and would never cease. In 1821 Lucy bore her youngest child, Lucy. In 1822 the Smiths were making arrangements to build a suitable home. Joseph worked along with the family in spite of persecution. But in September of 1823, he was visited by an angel, who explained to Joseph that an ancient book written on golden pages was buried nearby, and that Joseph would retrieve and translate the book.

The entire family believed Joseph wholeheartedly as he laid before them stories of Book of Mormon peoples and the principles of the restored gospel. Said Lucy,

In the course of our evening conversations, Joseph gave us some of the most amusing recitals which could be imagined. He would describe the ancient inhabitants of this continent, their dress, their manner of traveling, the animals which they rode, the cities that they built, and the structure of their buildings with every particular, their mode of warfare, and their religious worship as specifically as though he had spent his life with them” (Proctor, ed., p. 112).

Of the restored gospel that Joseph taught them, she said,

This caused us greatly to rejoice, the sweetest union and happiness pervaded our house, and tranquility reigned in our midst.

The restoration of the gospel of Jesus Christ was absolutely a family endeavor. It is doubtful Joseph could have accomplished it on his own. Lucy shed her motherly concern on new converts as they joined the faith. She exercised charity both in emotional and material ways, feeding converts who arrived without food, finding housing, and managing other women’s children as well as her own. Lucy and the Smith family sacrificed their reputation and safety to uphold the new church and Joseph’s work. Joseph called the Saints to gather in Kirtland, Ohio, and Lucy managed those gatherers who were the least prepared and most complaining. During the journey from Waterloo, New York, to Kirtland, Lucy preached the gospel to anyone who would hear, arranged steerage on the river and rooms during rainstorms. At one point, the river was clogged with ice. Lucy roused all the passengers to unified prayer, and the ice miraculously parted, creating a pathway just large enough for the riverboat. 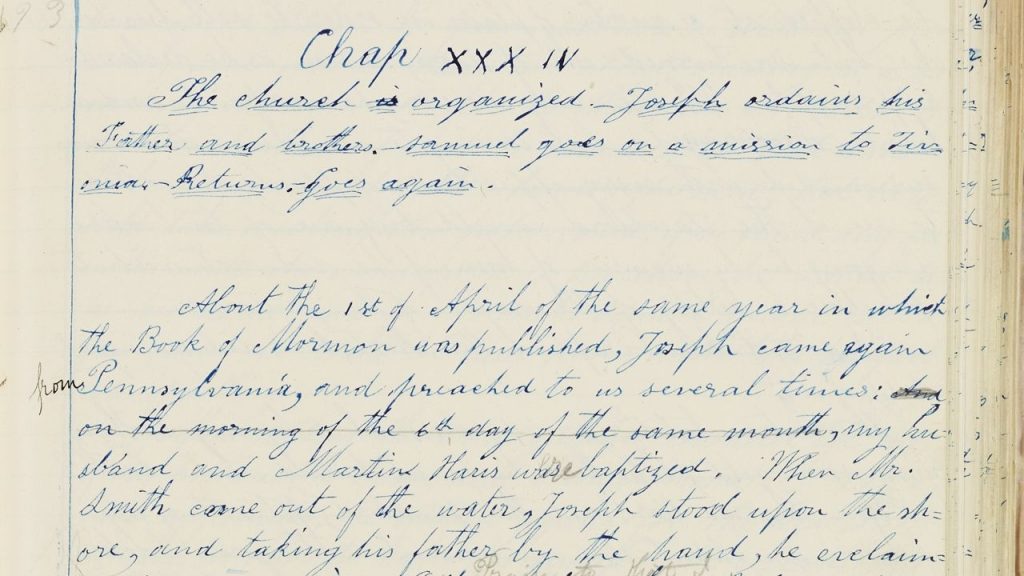 Lucy, and other members of the Smith family, relocated to every gathering place, and they were privy to all the persecutions, drivings, and sufferings of the Saints. In Missouri, she aided the Saints who were driven out of nearby settlements into Far West. She recounted their sufferings in her autobiographical writings. She constantly feared for her husband and sons, who strode forward in the work in spite of threatenings and oppression. Her husband died in Nauvoo, his health weakened by the Missouri persecutions and exodus to Illinois. Hyrum Smith and Joseph Smith were martyred together in 1844. After their martyrdom, their bodies were brought back to Nauvoo. Lucy wrote,

After the corpses were washed and dressed in their burial clothes, we were allowed to see them. I had for a long time braced every nerve, roused every energy of my soul, and called upon God to strengthen me, but when I entered the room and saw my murdered sons extended both at once before my eyes and heard the sobs and groans of my family and the cries of ‘Father! Husband! Brothers!’ from the lips of their wives, children, brothers, and sisters, it was too much; I sank back, crying to the Lord in the agony of my soul, ‘My God, my God, why hast thou forsaken this family!’ A voice replied, ‘I have taken them to myself, that they might have rest.’ 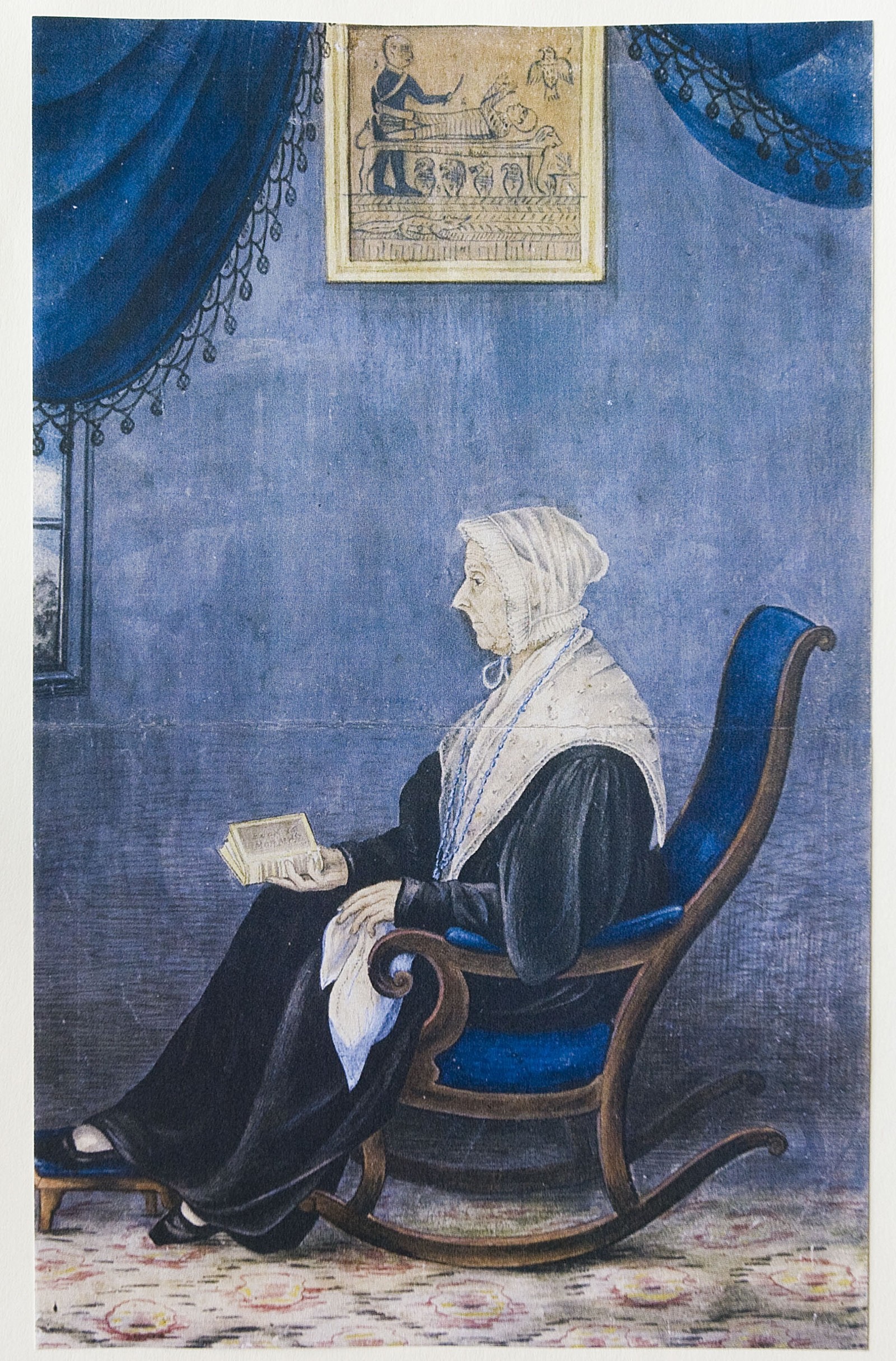 Painting of Lucy Mack Smith in Nauvoo by Sutcliffe Maudsley

In the confusion that followed the martyrdom, Lucy supported the authority of the Quorum of the Twelve Apostles and Brigham Young. She became a symbol of continuity from the charismatic church to the organized church endowed with the spirit. Lucy addressed church members at the October 1844 general conference and stated that she hoped all her children would accompany the Latter Day Saints to the west, and if they did, she too would go. Young said: “We have extended the helping hand to Mother Smith. She has the best carriage in the city, and, while she lives, shall ride in it when and where she pleases” (Millennial Star, vol. 7, p. 23). She intended to travel to Utah Territory to join the Saints as soon as a settlement was established

At this time, Lucy became a symbol of continuity, assuming greater importance because of the strained relationship between Young and Joseph’s widow, Emma. Hosea Stout noted in his diary on February 23, 1845, that Smith spoke at a church meeting. She spoke “with the most feeling and heartbroken manner” of “the trials and troubles she had passed through in establishing the Church of Christ and the persecutions and afflictions which her sons & husband had passed through” (1:23). Smith also asked permission to speak at the October 1845 general conference in Nauvoo. After she had recited the sufferings of her family on behalf of the church, she asked if they considered her a mother in Israel. Young formally conferred this title on Smith by saying: “All who consider Mother Smith as a mother in Israel, signify by saying ‘yes.’ One universal ‘yes’ rang throughout” (History of the Church 7:470-71). 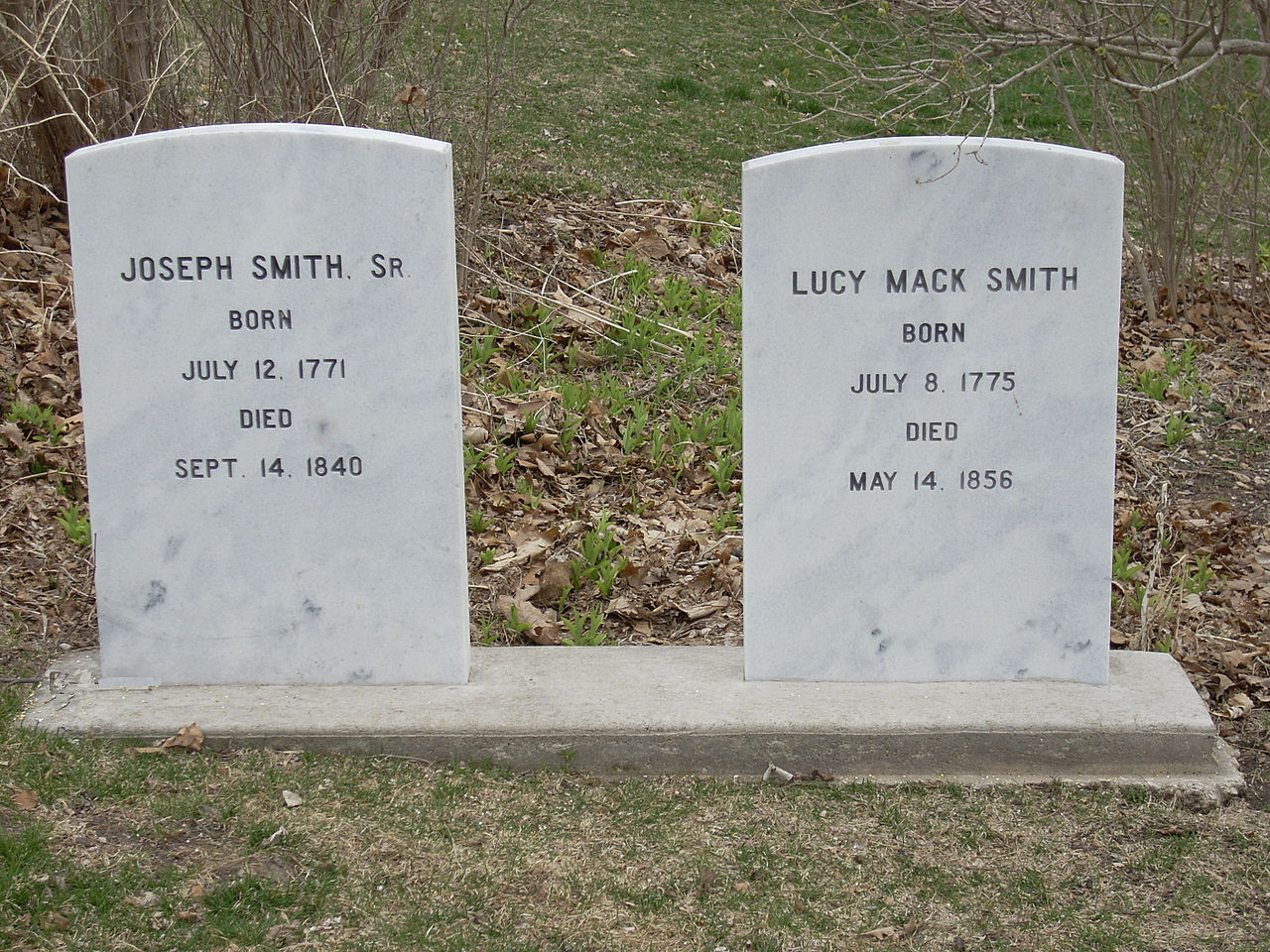 Lucy did not comment about the difficulties she encountered with church leaders during the transitional period—troubles which, without doubt, were exacerbated by her son William’s refusal to be subservient to Young—but they are suggested in the few letters and second-hand accounts that have survived (Quaife, 246–48). What is certain is that she never attempted the journey to Utah Territory: she remained in Nauvoo with her daughters, her daughter-in-law, Emma, and Emma and Joseph’s sons (Joseph III, David Hyrum, Alexander Hale, and Frederick G. W.) until her death in May 1856. Lucy bore eleven children, and all but four preceded her in death.