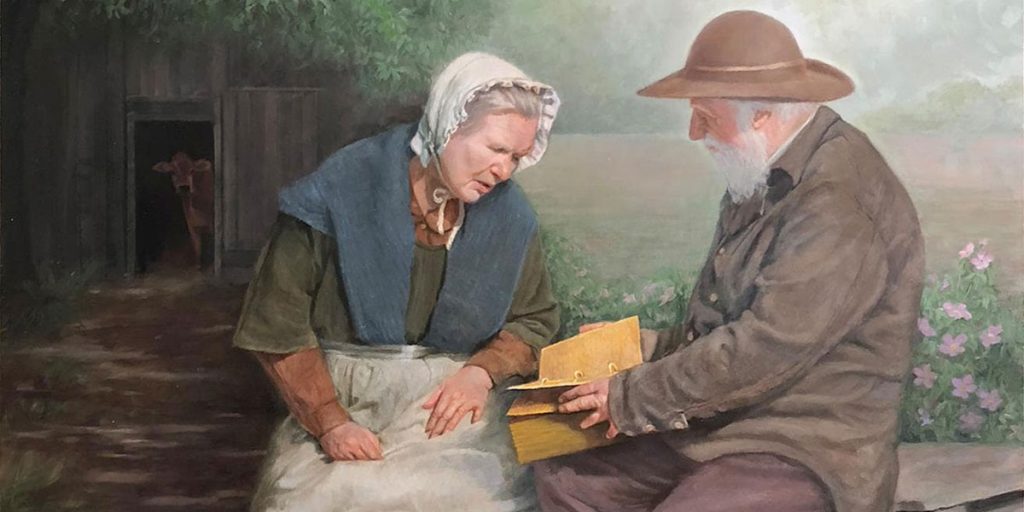 Mary Elsa Musselman was born in Germany to Jacob and Elizabeth Musselman. She immigrated to Pennsylvania in the late-18th century, where she met and married Peter Whitmer, a farmer, also of German descent. They moved to Waterloo, New York, in 1809, and later purchased a farm in Fayette, New York. They had eight children, Christian Whitmer, Jacob Whitmer, John Whitmer, David Whitmer, Catherine Whitmer Page, Peter Whitmer Jr., Nancy Whitmer, and Elizabeth Whitmer Cowdery.

Through her son David, she and her family became acquainted with Joseph Smith around 1828. In 1829, she was caring for three boarders (Smith, Emma Hale Smith, and Oliver Cowdery) in addition to her large household while the Book of Mormon was being translated. She said that she was often overloaded with work to the extent she felt it quite a burden. During this time, the male boarders and members of her household were speaking of being shown the golden plates. One evening, when she went to milk the cows, she said that a stranger with a knapsack spoke to her, explained what was going on in her house, comforted her, then produced a bundle of plates from his knapsack, turned the leaves for her, showed her the engravings, exhorted her to faith in bearing her burden a little longer, then suddenly vanished with the plates. Whitmer always called the stranger “Brother Nephi”.

Mary Whitmer was baptized a member of the Church of Christ by Oliver Cowdery in Seneca Lake, April 18, 1830.

She was excommunicated from the church with the entire Whitmer family in 1838. The family moved to Richmond, Missouri the same year, and she died there in January 1856, at the age of 77. Even though Mary followed her children and separated herself from the church and Joseph, she never changed or denied her testimony.

Mary Whitmer hosted many early Saints during the translation of the Book of Mormon. Elisabeth Westwood introduces Mary’s story and explains how it’s spoken to her as she has dealt with depression.

“Wherefore, the Lord God will proceed to bring forth the words of the book; and in the mouth of as many witnesses as seemeth him good will he establish his word; and wo be unto him that rejecteth the word of God!”
—2 Nephi 27:14

Many members of the Church know the stories of the Three and Eight Witnesses, but far fewer know about the “unofficial” witnesses to the plates. Among their ranks, Mary Whitmer stands out. Not only were her personal sacrifices indispensable in moving the translation forward, but she was blessed with the appearance of an angelic messenger that showed her the plates themselves. We may not receive a divine manifestation like Mary’s, but her story shows that the Lord is mindful of all his children, and blesses us each in our own way.