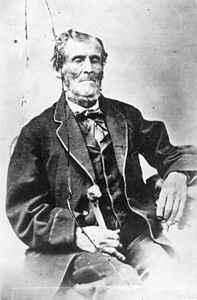 Martin Harris, one of the three witnesses to the Book of Mormon

Martin Harris was born on May 18, 1783 in Washington County, New York. Physical descriptions of him say that he was 5 feet 8 inches tall, had blue eyes, brown hair, and a Greek-style beard shaved to grow off the edge of his jaw and chin. In 1808, he married Lucy Harris, his first cousin, and they eventually had at least six children. During the War of 1812, Harris enlisted and was eventually promoted to First Sergeant in the Thirty-ninth New York Militia. He was known as an honored veteran when he returned to his home.

Martin Harris was a skilled farmer. He inherited 150 acres of land, and by 1828 owned 320 acres of land in the Palmyra, New York area. He was described as industrious, an excellent provider and father, honest, sincere, shrewd in business, and devoted to civic affairs. Harris was in favor of the building of the Erie canal, which passed nearby his house. He supported that project and held elected positions within the community of Palmyra. “A Jeffersonian-Jacksonian Democrat, he was a believer in the value of homespun common sense. He favored gold and silver money and rejected paper currency. He distrusted banks, Federalists, and authoritarians. A Christian democratic activist, he admired ancient Greek culture and raised money for Greek Christians to fight the Turks.”[1]

In his religious life, Harris did not attend church but instead believed in the “restorationist” ideal, and looked for the return of Christianity as described in the Bible. He is quoted as saying that “in the year 1818 … I was inspired of the Lord and taught of the Spirit that I should not join any Church” (Richard Lloyd Anderson, Investigating the Book of Mormon Witnesses, p. 170). By 1824, Martin had met Joseph Smith and knew of his vision, the gold plates, and the appearance of the angel Moroni. He helped Joseph Smith protect the gold plates and provided him with much-needed financial support.

In 1828, Harris took copies of some of the characters from the golden plates and Joseph’s translations to scholars in Utica, Albany, and New York City. The scholars, upon seeing the characters, said they were original and true to form, but upon learning how Harris had obtained them, they refused to give him their scholarly endorsement. Because part of the Book of Mormon was sealed, Joseph Smith and Martin Harris felt this was a fulfillment of the prophecy found in Isaiah 29:11-14—

And the vision of all is become unto you as the words of a book that is sealed, which men deliver to one that is learned, saying, Read this, I pray thee: and he saith, I cannot; for it is sealed:

And the book is delivered to him that is not learned, saying, Read this, I pray thee: and he saith, I am not learned.

Wherefore the Lord said, Forasmuch as this people draw near me with their mouth, and with their lips do honour me, but have removed their heart far from me, and their fear toward me is taught by the precept of men:

Martin Harris hoped the connection with Isaiah’s prophecy would encourage financial and religious support for the Book of Mormon.

Martin Harris worked as Joseph’s scribe from April to June of 1828. During that time they completed 116 pages of manuscript. Martin’s family became progressively annoyed with his devotion to Joseph Smith and wanted proof that he was not wasting his time and money. After much begging and pleading, he convinced Joseph to let him take the pages of the manuscript to show his family. While the pages were in his custody, they were stolen, a tremendous blow to both Martin and Joseph. After this loss, Martin stopped working as Joseph’s scribe. There has been speculation that Lucy Harris was responsible for the loss of the 116 pages of manuscript. She was ill, was losing her hearing, and may have feared loss of income, property, or security if the family allied itself with Joseph Smith’s gospel restoration.

In June of 1829, while Harris was with Joseph Smith, they were shown a vision. Martin Harris testified that he heard God’s voice telling him that Joseph’s translation of the gold plates was correct and that he was to testify of their truthfulness. His testimony, and those of two others, can now be found in the front of the Book of Mormon under the title The Testimony of the Three Witnesses.

When the translation of the Book of Mormon was complete, a printer had to be found, and funds had to be raised to pay for publication. Egbert B. Grandin, a Palmyra printer, agreed to print the book, but the agreement was reached only after Martin Harris agreed to pay $3000 up front. For this, Harris mortgaged part of his farm. On April 7, 1831, Harris sold a part of his farm to pay for the rest of the printing. Harris had received a revelation through Joseph Smith encouraging his financial support for the project. The revelation is still scripture, comprising section 19 of the Doctrine and Covenants:

And again, I command thee that thou shalt not covet thine own property, but impart it freely to the printing of the Book of Mormon, which contains the truth and the word of God—

Which is my word to the Gentile, that soon it may go to the Jew, of whom the Lamanites are a remnant, that they may believe the gospel, and look not for a Messiah to come who has already come.

Impart a portion of thy property, yea, even part of thy lands, and all save the support of thy family.

Pay the debt thou hast contracted with the printer. Release thyself from bondage (Doctrine and Covenants 19:26, 27, 34, 35).

This financial sacrifice put even more strain on Harris’ marriage.

Martin Harris was present at the organization of the Church on April 6, 1830, and was baptized that day by Oliver Cowdery. In May 1831 he led fifty converts from Palmyra to Kirtland, Ohio. When Harris moved to Kirtland, Ohio, his wife refused to follow. Martin was thus obliged to maintain two households some miles apart. In the summer of 1831, Harris accompanied Joseph Smith and others to Missouri to purchase property and designate the site for Zion, where the Saints were to gather. That year, he also helped supervise and finance Church publications. Harris was one of the first to be asked to live the law of consecration,a divinely revealed plan for equalizing the distribution of property and providing for the poor. Harris returned to the east in 1832. Harris and his brother Emer served a mission together, baptizing one hundred persons at Chenango Point (now Binghamton), New York. In January 1833, Martin Harris was imprisoned briefly in Springville, Pennsylvania, in an attempt to stop him from preaching.[2] In 1834 he volunteered to go to Missouri with Zion’s Camp, and helped Joseph Smith select the first members of the Quorum of the Twelve Apostles. In 1836 Harris attended the dedication of the Kirtland Temple. Later that summer, his wife Lucy passed away, and he married Caroline Young, Brigham Young’s niece, on November 1, 1836. They eventually had seven children.

In Ohio, during a time when the entire country was caught up in financial speculation, Harris clashed with Sidney Rigdon and refused to join the Church-sponsored Kirtland Safety Society, which was issuing paper money. Harris was released from the high council on September 3, 1837, and was excommunicated during the last week of December 1837. Although there is evidence that Harris’ excommunication was never official, he accepted the action and subsequently applied for and was baptized on November 7, 1842.[3] The following years were hard for the Church, and while the body of the Church moved on to Missouri, Illinois, and eventually, Utah, Harris stayed behind in Kirtland. Martin Harris continued to bear his testimony of the truthfulness of the Book of Mormon. He considered himself a sort of guardian of the deserted Kirtland Temple. During this time, he also went to England to preach the gospel.

Martin Harris had prospered in Kirtland, but Brigham Young and other members of the Church in Utah invited Harris and his family to join them in Utah. Martin’s children and Caroline left for Utah in 1856, but Martin remained behind until 1870. After his family left Kirtland, Harris lived for a time with George Harris, his son by Lucy. From 1865 to 1870, he supported himself by leasing ninety acres of land in Kirtland. In 1869 members of the Church sent money to help Martin come to Utah. He was 87 years old, but still active and in good health. He took the journey by train and arrived in Utah on August 30, 1870. He was baptized again, as evidence of his reaffirmation of faith, on September 17, 1870. He lived in Utah among the Saints until his death on July 10, 1875. He was ninety-two years old. Near the end of his life, Martin Harris bore this testimony of the truthfulness of the Book of Mormon:

Yes, I did see the plates on which the Book of Mormon was written. I did see the angel, I did hear the voice of God, and I do know that Joseph Smith is a true Prophet of God, holding the keys of the Holy Priesthood (“The Last Testimony of Martin Harris,” recorded by William H. Homer in a statement sworn before J. W. Robinson, Apr. 9, 1927, HDC).

The Church puts on an annual pageant called “Martin Harris: The Man Who Knew” in Clarkston, Utah where Harris died.