Martin Harris Statements as One of the Three Witnesses 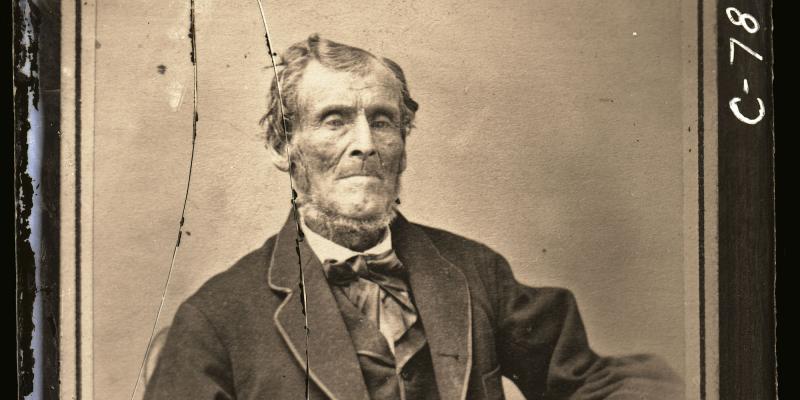 Martin Harris was the first person besides Joseph Smith to be promised a view of the plates which contained the Book of Mormon, on the condition that he “humble himself in mighty prayer and faith” (D&C 5:24).[1] When the day came for the Three Witnesses to see the plates, Martin was again warned that he needed to humble himself before God if he wanted to “look upon the plates.”[2]

Martin struggled to exercise the requisite faith and humility, even as he went into the woods to seek for the promised vision with Joseph Smith, Oliver Cowdery, and David Whitmer. Martin withdrew from the group, and Joseph, Oliver, and David received the vision without him. Then Joseph sought out Martin, whom he found praying in the woods. The vision was then revealed to Joseph and Martin. Ecstatic at finally being granted a view of the plates, Martin cried out, “’tis enough, ’tis enough, mine eyes have beheld, mine eyes have beheld.”[3]

Throughout his life, Martin continued to bear testimony that he saw an angel and the golden plates, and that he heard a voice from heaven testify that the plates had been translated “by the gift and power of God.”[4] His consistent testimony is documented by more than 100 sources.[5] Most of these are the recollections of others about what Martin said, but a few are first-hand.

In an interview with Joel Tiffany, Martin affirmed that “by the power of God I have seen [the plates].” When Martin finally came west to join the Saints in Utah, he spoke at the Salt Lake Tabernacle, declaring, “Previous to my being baptised I became a Witness of the Plates of the Book of Mormon.”[7] In a letter to Hanna Emerson, Martin wrote, “concerning the plates, I do say that the angel did show to me the plates containing the Book of Mormon.”[8] Martin emphatically reaffirmed this in a second letter to Emerson a few months later.[9]

Beyond these brief first-hand statements, many who heard Martin testify left behind their recollections of his testimony. As second-hand documents, singular accounts should be treated with some caution,[10] but collectively they testify to Martin’s lifetime commitment to bear witness of the Book of Mormon. 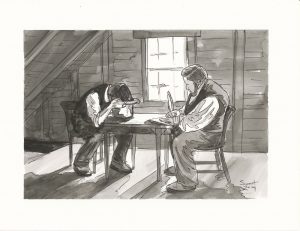 Not only did Martin Harris see the plates, but he witnessed and participated in the translation of the Book of Mormon. Translating with Martin, by Anthony Sweat.

Skeptics and dissidents who heard Martin testify remembered him talking about seeing the plates with “spiritual eyes,” or the “eye of faith,” which they interpreted as meaning he did not really see the plates at all, only in “vision” or “imagination.”[11] Martin, however, was only striving to fulfill his commission to testify that the plates were shown to him “by the power of God and not of man” (D&C 5:25). Thus, for Martin, seeing with “spiritual eyes” was more—not less—than seeing with the “natural eye.”[12]

Witnesses remember hearing Martin stress that his vision of the angel and the plates was as real and sure as the shining sun.[15] On other occasions, Martin would point to an object within sight of his hearers—an apple tree, a chopping block, axe-head, or even his own hand—and insist that as sure as they saw that object, he saw the angel with the plates.[16] Martin often stressed that based on his experience with the angel and the plates, he did not believe the Book of Mormon was true, but rather he knew it was true.[17] 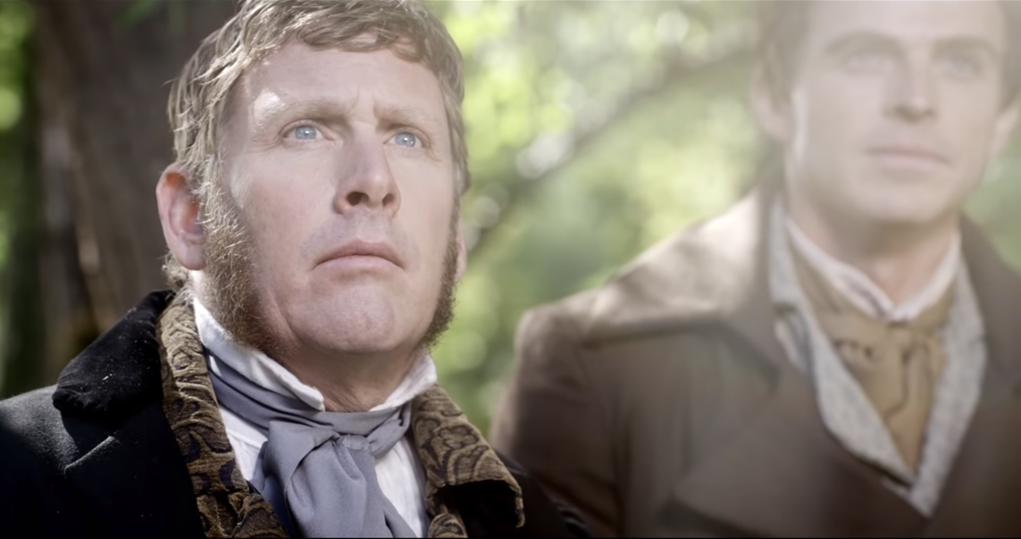 Martin Harris and Joseph Smith behold the Angel Moroni, from the film “A Day for the Eternities.”

Martin’s vision of the angel and plates turned him from a cautious and skeptical follower of Joseph Smith, to a man who knew the Book of Mormon was true, even as he faltered in his faith in some of Joseph’s later prophetic pronouncements.[18] Martin’s enduring witness was borne not only in his words, but in a lifetime of faithful testimony, which came at high financial and social costs.[19] He even traveled to England with supporters of James Strang, making him the only one of the three witnesses to bear testimony outside of North America.[20]

Toward the end of his life, Martin could honestly say “no man ever heard me in any way deny the truth of the Book of Mormon, [and] the administration of the angel that showed me the plates.”[21] On his deathbed, several witnesses said that he bore his final testimony of the Book of Mormon, the angel, and the plates with his last audible words.[22]

By Neal Rappleye, cross-posted with the permission of Book of Mormon Central from their website at Evidence Central.

“Question 1, ‘Did you go to England to lecture against “Mormonism”?’
“Answer. I answer emphatically, No, I did not;—no man ever heard me in any way deny the truth of the Book of Mormon, the administration of the angel that showed me the plates; nor the organization of the Church of Jesus Christ of Latter Day Saints, under the administration of Joseph Smith Jun., the prophet the Lord raised up for that purpose, in these the latter days, that he may show forth his power and glory. The Lord has shown me these things by his Spirit–by the administration of holy angels–and confirmed the same with signs following….”[34]

[6] Joel Tiffany, “Mormonism—No. 2,” Tiffany Monthly 5, no. 4, August 1859, in Morris, Documentary History, 194. Martin’s claim in this interview that Joseph Smith and the three witnesses are the only ones to ever see the plates may be alluding to the three witnesses’ unique status as the only ones besides Joseph Smith to be shown the plates by an angelic messenger. In any case, Martin’s testimony of his own experience as one of the three witnesses, and his affirmation here that they saw the plates, is authoritative as a first-hand statement, but he cannot negate the experiences and testimonies of others, such as the eight witnesses, who testified to seeing the plates. See Larry E. Morris, “Empirical Witnesses of the Gold Plates,” Dialogue: A Journal of Mormon Thought 52, no. 2 (2019): 75–76.

[7] Martin Harris’s Testimony, September 4, 1870, in Morris, Documentary History, 297. Morris identifies this as a transcript of Martin’s speech at the Tabernacle, but Vogel (EMD 2:331) considers it a document dictated directly to Edward Stevenson that morning, separate from the speech he gave. See also Black and Porter, Martin Harris, 431–434. Charlette Adams, who was in attendance at the Tabernacle on this occasion, remembered Martin holding out his arm and saying “I would rather have my right arm cut off than deny the knowledge of seeing and handling the plates” (EMD 2:389, spelling silently corrected). Wilford Woodruff was also in attendance, and recorded in his journal, “Martin Harris arose & bore testimony to the truth of the Book of Mormon.” Wilford Woodruff Journals, 1865 October–1872 December, September 4, 1870, LDS Church Archives.

[8] Martin Harris to H. B. Emerson, November 23, 1870, in Morris, Documentary History, 237. For some background on this letter, see Richard L. Anderson, “Personal Writings of the Book of Mormon Witnesses,” in Book of Mormon Authorship Revisited: The Evidence for Ancient Origins, ed. Noel B. Reynolds (Provo, UT: FARMS, 1997), 45–46.

[10] Steven C. Harper, “The Eleven Witnesses,” in The Coming forth of the Book of Mormon: A Marvelous Work and a Wonder, ed. Dennis L. Largey, et al. (Salt Lake City and Provo, UT: Deseret Book and BYU Religious Studies Center, 2015), 120, 123 discusses the pitfalls of relying on second-hand accounts about the witnesses.

[12] For discussion and critical evaluation of the sources mentioning “spiritual eyes,” see Anderson, Investigating, 155–158; Morris, Documentary History, 370–372; Harper, “The Eleven Witnesses,” 119, 124–127. Even Dan Vogel, who strongly favors these accounts emphasizing the “spiritual” or “visionary” nature of the experience (which Vogel interprets as meaning “subjective”) notes that Martin himself understood this language to be in accordance with D&C 5:25 and 17:2–3 (see EMD 2:254–258). Vogel ultimately concludes, “Regardless of the nature of Harris’s visionary experience with the plates, Harris believed in the book’s verity. His experience apparently gave him the necessary proof he sought” (EMD 2:258).

[15] George Mantle to Marietta Walker, December 26, 1888, in EMD 2:387; William Harrison Homer, testimony given January 3, 1922, in EMD 2:314; William Pilkington, affidavit, April 3, 1934, in EMD 2:355. See also Anderson, Investigating, 116–117. Mantle to Walker is recounting what Mantle heard Martin say in Birmingham, England, in 1846. This comparison may have been inspired by his Patriarchal blessing, where he was promised that his testimony would “shine like the sun.” See Black and Porter, Martin Harris, 263.

[18] On the ways Martin exercised caution and skepticism about Joseph’s claims before seeing the angel and plates, see Anderson, Investigating, 107–109.