Why Did Martin Harris Come Back to the Church? 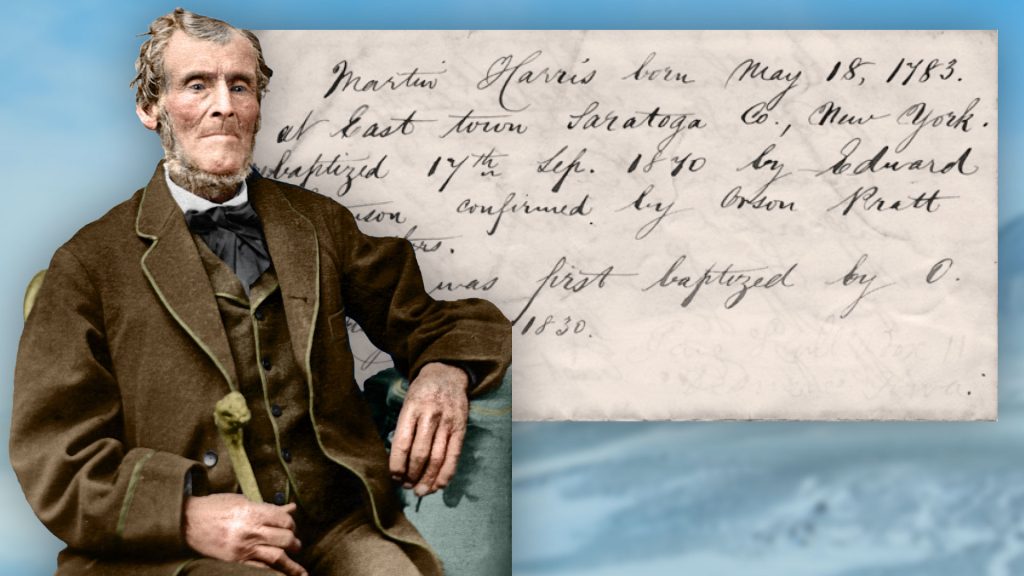 “And I the Lord command him, my servant Martin Harris, that he shall say no more unto them concerning these things, except he shall say: I have seen them, and they have been shown unto me by the power of God.”

Despite being one of the earliest and most important contributors to the Restoration, in late 1837, Martin Harris was “cut-off” from the Church for associating with a splinter group that was undermining Joseph Smith and Church leaders. Within just a few months, however, Martin was already parting ways with this faction because they were rejecting the Book of Mormon—something that, as one of the Three Witnesses, Martin simply could not do because he knew the Book of Mormon was true.[1]

Over the next few years, Martin’s relationship with the main body of the Church was somewhat ambiguous. In July 1840, Martin had reportedly “come into the Church” again.[2] In 1841, when a stake was officially reestablished in Kirtland, Martin’s name was among those submitted for inclusion in the high priests quorum, but he was not sustained due to an objecting vote.[3] About a month later, however, a newspaper in Painesville reported that “Martin Harris believes that the work [of the Restoration] in its commencement was a genuine work of the Lord, but that [Joseph] Smith, having become worldly and proud, has been forsaken of the Lord.”[4]

In the fall of 1842, Martin seems to have more officially been readmitted into the Church. Elders Lyman Wight, John P. Greene, and Alexander Badlam reorganized the Kirtland stake, and many were rebaptized at that time—including Martin Harris, according to letters written from Kirtland in early 1843.[5] Martin’s status in the Church from that point until Joseph Smith’s death is unclear, but apparently by December 1844, when Phineas Young others were sent by the Twelve Apostles to check on the status of the Church in Kirtland, Martin had defected to Shakerism.[6] The exact nature of Martin’s interest in the Shakers, however, is unclear and was evidently brief,[7] and remarkably he still continued to testify of the Book of Mormon during this time.[8]

By 1846, Martin was following a Latter-day Saint off-shoot led by James Strang. In the fall of that year, he joined Strangite apostle Lester Brooks on a mission to England. During this mission, all that Martin really wanted to do was testify of the Book of Mormon, so Brooks cut the mission short and took Martin back to the United States because he refused to outright support the Strangite cause. Reminiscences from British converts in both the Salt Lake-based Church and the RLDS Church affirmed that Martin boldly testified of the Book of Mormon while in England, making him the only one of the Book of Mormon Witnesses to testify outside of North America.[9]

Upon returning home, Martin would spend the next few decades religiously homeless—reluctant to reunite with the main body of the Church, but also unwilling to deny the Book of Mormon and unite with another body of Christians. Latter-day Saints traveling east for missionary work and other purposes often stopped and spoke to Martin. They reported that Martin still affirmed his testimony of the Book of Mormon, but harbored a grudge toward the leading brethren in the Salt Lake Valley. Martin would briefly affiliate with other Book of Mormon-believing off-shoots, but generally found no lasting fulfillment with these groups. His Kirtland neighbors during this time remembered him as an independent “Mormon” preacher.[10]

By the late 1860s, Martin was isolated and languishing in Kirtland.[11] His wife and children had joined her extended family in Utah in 1858.[12] Despite his indignant circumstances, he continued to testify of the Book of Mormon, and one source remembered he “had spent his estate in promulgating Mormonism.”[13] Even through the years and decades of estrangement from the Church, Martin had never stopped bearing his testimony of the Book of Mormon. Eventually that ever-burning testimony, coupled together with his desire to see his family again, compelled him westward to Utah and a reunion with The Church of Jesus Christ of Latter-day Saints.[14]

The impact of Martin’s desire to see his family is evident in the conversation he had William H. Homer, who had personal ties to Martin’s family.[15] In December 1869, Homer was returning to the Salt Lake Valley after serving a mission in England and stopped in Kirtland to visit the abandoned temple. He learned that Martin Harris was acting as the informal custodian of the temple and would provide tours of the building.[16] He mentioned that Martin Harris Jr. (Martin’s son) had married his sister, thus appealing to their personal connection. Like others, however, Homer remembered Martin expressing disdain for the leaders of the Utah Church. But when he asked Martin about the Book of Mormon, “the effect was electric.”[17]

“Young man,” Martin replied, “Just as surely as the sun is shining on us and gives us light, and the sun and stars give us light by night, just as surely as the breath of life sustains us, … so surely do I know that the Book of Mormon was divinely translated. I saw the plates; I saw the angel; I heard the voice of God.”[18]

“It was a sublime moment,” remembered Homer. “We were thrilled to the very roots of our hair.”[19] That moment of testimony, and the Spirit it brought into the conversation, opened the door for Martin to experience a change of heart. Martin began to inquire about his family and expressed a desire to see them again. With some persistent urging by Homer, Martin agreed to allow him to carry a message to Brigham Young, saying he would “accept help from the Church” to get him to Utah to see his family.[20]

The persistence of other inspired and generous members of the Church then made Martin’s honorable return possible. Only two months later, Edward Stevenson, another missionary from Utah, was returning home from the eastern States and made a stop at Kirtland. He also visited with “Martin Harris, who bore testimony of the angel, records, and translation” of the Book of Mormon.[21] After Stevenson returned to Utah, he did not let this opportunity pass by. He opened correspondence with Martin, and in one of his replies Martin affirmed “I had a witness for the first time that I must gather with the Saints.”[22] Having obtained support and approval from Brigham Young and Martin Harris Jr., Stevenson personally began actively fundraising to bring Martin out to Utah.[23]

In mid-July 1870, Stevenson set out again for Kirtland, arriving in early August. By August 19, 1870, Martin Harris was on a train headed west.[24] As Stevenson and Martin made their way toward Salt Lake, Martin told stories about the translation of the Book of Mormon and his experiences testifying amongst his non-believing neighbors in Kirtland.[25] Major mid-west newspapers interviewed the Book of Mormon Witness as he passed through their towns along the way,[26] with Stevenson purchasing a new suit of respectable clothes for Martin.

Finally, on August 29, 1870, Martin Harris arrived at the new railroad station in Ogden, Utah, and went down to Salt Lake the next day. Before the completion of the railroad just a year earlier, such a journey would have been prohibitive for a man now 87 years old. Over the next few days, his arrival was announced by all the major newspapers. On September 4, 1870, Martin was invited to speak to a large congregation in the Salt Lake Tabernacle. For many in the audience, it was likely the first time they got to hear the stories of the Book of Mormon’s discovery, translation, and the vision of the angel and the plates from an eyewitness.[27]

Over the next few weeks, Martin stayed in the Salt Lake area. On September 17 he was rebaptized by Edward Stevenson and confirmed by Orson Pratt (whom Martin had ordained an apostle back in 1835).[28] After enjoying many more occasions to bear testimony of the Book of Mormon at both public and private gatherings, Martin was then taken to Cache Valley to fulfill his desire to be reunited with his son and meet his grandchildren for the first time. Over the next five years, Martin continued to bear testimony of the Book of Mormon to anyone who would listen.[29]

Once in Utah, Martin was blessed with a glimpse of the real impact the Book of Mormon was having in the world, and it left him in awe. On one occasion while in Salt Lake, he took a carriage ride with some of the leading brethren of the Church. As they crested a hill with a good vantage point, the curtains over the windows were raised, “giving a magnificent view of the city below.” Martin was “wrapped in admiration” and remarked, “Who would have thought that the Book of Mormon would have done all this?”[30]

At last, his return allowed him to see with his own eyes that the words of his faithful testimony—as printed in every edition of the Book of Mormon—had indeed truly been sent out to the world, and had “convince[d] its thousands and its tens of thousands,” just as the Lord had promised him in his patriarchal blessing 35 years earlier.[31]

In his final days, even as he was ill and approaching death, he was constantly bearing testimony whenever he had sufficient strength to do so. More than a dozen people heard him testify of the Book of Mormon within those final days before his passing on July 10, 1875.[32] Moments before his death, he assured those attending to him at his bedside, “Yes, I did see the plates on which the Book of Mormon was written; I did see the angel; I did hear the voice of God; and I do know that Joseph Smith is a Prophet of God.”[33]