Why Did Martin Want a View of the Plates in March 1829? 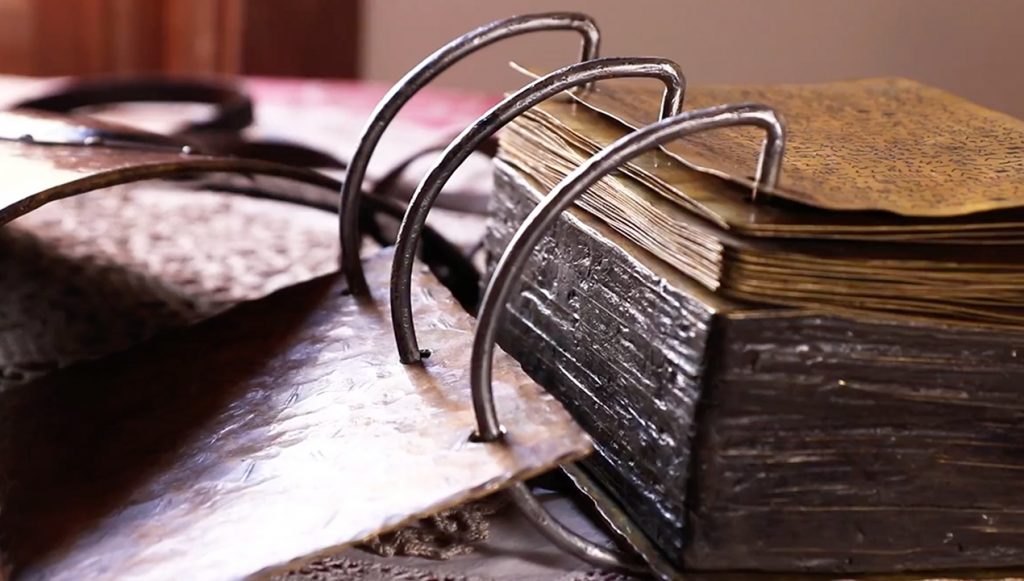 Replica of the gold plates by David Baird.

“Wherefore, the by words of three, God hath said, I will establish my word. Nevertheless, God sendeth more witnesses, and he proveth all his words”

After Martin Harris told Joseph in July 1828 that he had lost the 116 pages of the Book of Mormon translation manuscript that Martin had helped transcribe earlier that spring, the two of them did not have any contact, as far as we know, until March 1829.[1] At that time, as Martin later remembered, “the people rose up and united against the work, gathering testimony against the plates.”[2] According to Lucy Mack Smith, Martin’s wife Lucy Harris spearheaded the effort, mounting her horse and riding “from house to house through the neighborhood, like a dark spirit” gathering testimony against Joseph’s claim to have gold plates.[3]

Lucy and others were planning to file a lawsuit against Joseph Smith for attempting to defraud people, particularly Martin himself, with false claims about having gold plates.[4] The people told Martin that they had sufficient testimony to incriminate both Joseph and his father, Joseph Smith Sr., and if Martin did not help them “put Joseph in jail … for deception,” they would also charge Martin as a co-conspirator.[5]

This situation inspired Martin to go to Harmony and meet with Joseph Smith. Due to the impending legal proceedings, Martin had good reasons to want and ask for “a greater witness” of the plates.[6] As a result, Joseph Smith sought the will of the Lord, and received the revelation now canonized as Doctrine and Covenants 5.[7] In this revelation, the Lord acknowledged that “my servant Martin Harris has desired a witness at my hand, that you, my servant Joseph Smith, Jun., have got the plates of which you have testified and borne record that you have received of me” (D&C 5:1).

Through Joseph Smith, the Lord reminded Martin that the plates could only be shown to those whom the Lord commanded should see them (D&C 5:3). The Lord then informed Martin and Joseph that, “in addition to [Joseph’s] testimony, the testimony of three of my servants, whom I shall call and ordain, unto whom I will show these things … shall go forth with my words” (D&C 5:11, see also v. 15). Those three, the Lord continued, “shall know of a surety that these things are true, for from heaven will I declare it unto them” (D&C 5:12).

The Lord then promised Martin, “if he will bow down before me, and humble himself in mighty prayer and faith, in the sincerity of his heart, then will I grant unto him a view of the things which he desires to see” (D&C 5:24). After Martin would see the plates, the Lord instructed him to witness to what he saw by testifying in the following manner: “Behold, I have seen the things which the Lord hath shown unto Joseph Smith, Jun., and I know of a surety that they are true, for I have seen them, for they have been shown unto me by the power of God and not of man” (D&C 5:25, see also vv. 26–27).

The Lord also issued several warnings to those of “this generation” who “lie in wait to destroy [Joseph] from the face of the earth” (D&C 5:18, 33), most likely referring to the people organizing the trial against Joseph at that time. To them, the Lord warned that “woe” should befall them and that His “anger is kindled against them” (D&C 5:5, 8). They would be condemned “if they harden their hearts against” the three witnesses, and a “desolating scourge” would come upon them (D&C 5:18–19).

Martin left Harmony satisfied that Joseph had the plates. On his way back to Palmyra, he enthusiastically told a passenger sharing his stage couch all about the Book of Mormon, and even quoted parts of what was already translated to him.[8] As Steven C. Harper has pointed out, “This revelation reoriented Martin.”

He came to the Lord saying, “Show me and I’ll believe. And let me prove to others so they’ll believe.” With Joseph as mediator, the Lord responded that he would show Martin after he chose to believe and to be humble, not before.[9]

As a result, when the day in court came, Martin could and did confidently bear testimony in support of Joseph Smith.[10] Various witnesses, inconsistent with each other, testified that the box with the plates actually contained sand, or lead, or even nothing at all, and speculated that it was a scheme to defraud Martin out of his money.[11] Martin then “testified with boldness, decision, and energy,” saying, “I can swear, that Joseph Smith never has got one dollar from me by persuasion, since God made me.” Then, echoing the warnings of the Lord in D&C 5, he declared, “And as to the plates which he professes to have, gentlemen, if you do not believe it, but continue to resist the truth, it will one day be the means of damning your souls.”[12]

Revelation from the Lord had given Martin confidence, and despite not yet having seen the plates, he showed his faith in the Lord’s promises. During the final days of June 1829, he was rewarded for his faith, joining Oliver Cowdery and David Whitmer as one of the Three Witnesses of the Book of Mormon. They were shown the plates by an angel—perhaps Moroni himself—and heard the voice of God declare that the now finished translation of the ancient record was correct.[13] Martin, along with the others, was faithful to this testimony for the rest of his long life.[14]

When viewed in the surrounding historical context, Martin’s desire to obtain a witness of the plates can be seen as a response to mounting social pressure and even serious legal action. Like Martin, many people today may find that their faith in the Book of Mormon is being similarly contested or refuted by some people around them.

Yet, instead of caving into pressure, we too can seek more diligently and faithfully to obtain answers from God. After all, much like the promise given to Martin in D&C 5, readers everywhere have been given a promise that they will receive a testimony of the Book of Mormon’s truthfulness, if they will only seek it with confidence in Christ’s mercy and goodness, and with faithfulness, patience, diligence, sincerity, and real intent (Moroni 10:3–5). Instead of letting outside pressure detract from our testimonies, we can, as Martin Harris did, let it propel us towards new levels of faith, conviction, and dedicated action that we might not ever otherwise attain.

[3] Lucy Mack Smith, Biographical Sketches of Joseph Smith the Prophet (1853), in Morris, Documentary History, 295. Lucy dates these events to the beginning of August 1829, but this is an apparent misdating since her narrative about these events is situated chronologically before the translation is complete, while Joseph is still in Harmony. That would date it to the spring of 1829 (i.e., April or May 1829), closer to the March 1829 date Martin gives. As such, most historians follow Martin Harris in dating these events to March 1829. See Susan Easton Black and Larry C. Porter, Martin Harris: Uncompromising Witness of the Book of Mormon (Provo, UT: BYU Studies, 2018), 125–126 n.10; Morris, Documentary History, 535 nn. 19, 21; Wayne Cutler Gunnell, “Martin Harris: Witness and Benefactor to the Book of Mormon,” (master’s thesis, Brigham Young University, 1955), 29–30. It is possible that Lucy Harris and others started gathering evidence in March, and that the legal proceedings did not occur until later in the spring. Michael Hubbard MacKay and Gerrit J. Dirkmaat, From Darkness Unto Light: Joseph Smith’s Translation and Publication of the Book of Mormon (Salt Lake City and Provo, UT: Deseret Book and BYU Religious Studies Center, 2015), 107, propose that Lucy Harris was only threatening a lawsuit, and gathering evidence, in March 1829, but that the legal proceedings took place in August 1829.

[10] See Black and Porter, Martin Harris, 125–127 for a more detailed discussion of the judicial proceedings.

[12] Smith, Biographical Sketches, in Morris, Documentary History, 296–297. MacKay and Dirkmaat, From Darkness Unto Light, 184 noted that Martin’s testimony “echoed the revelation he had received in March 1829.”

[13] See the Testimony of Three Witnesses, Book of Mormon. 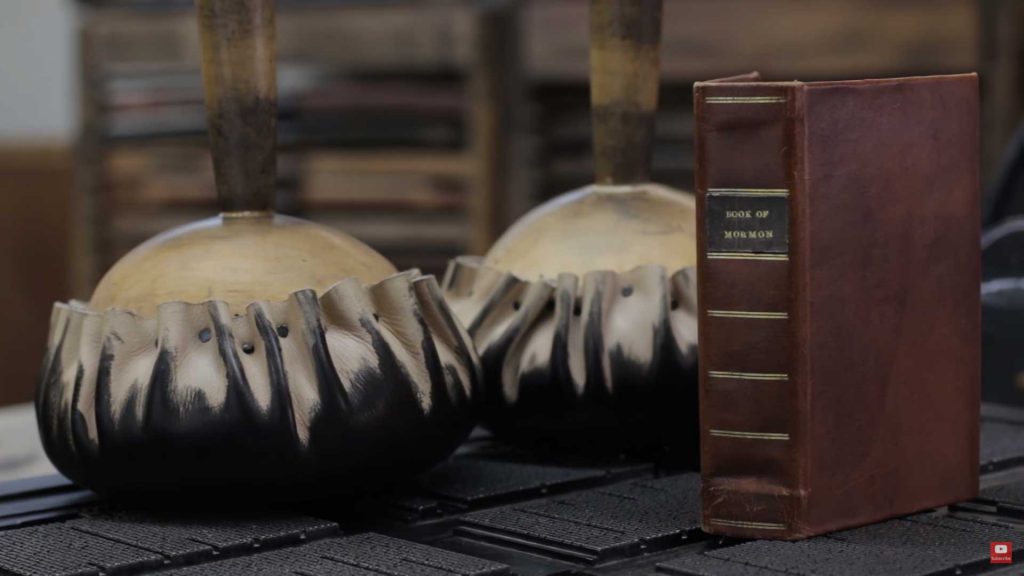